Home
Bulletin of the School of Oriental and African Studies

The historical development of the structure of medieval Arabic petitions 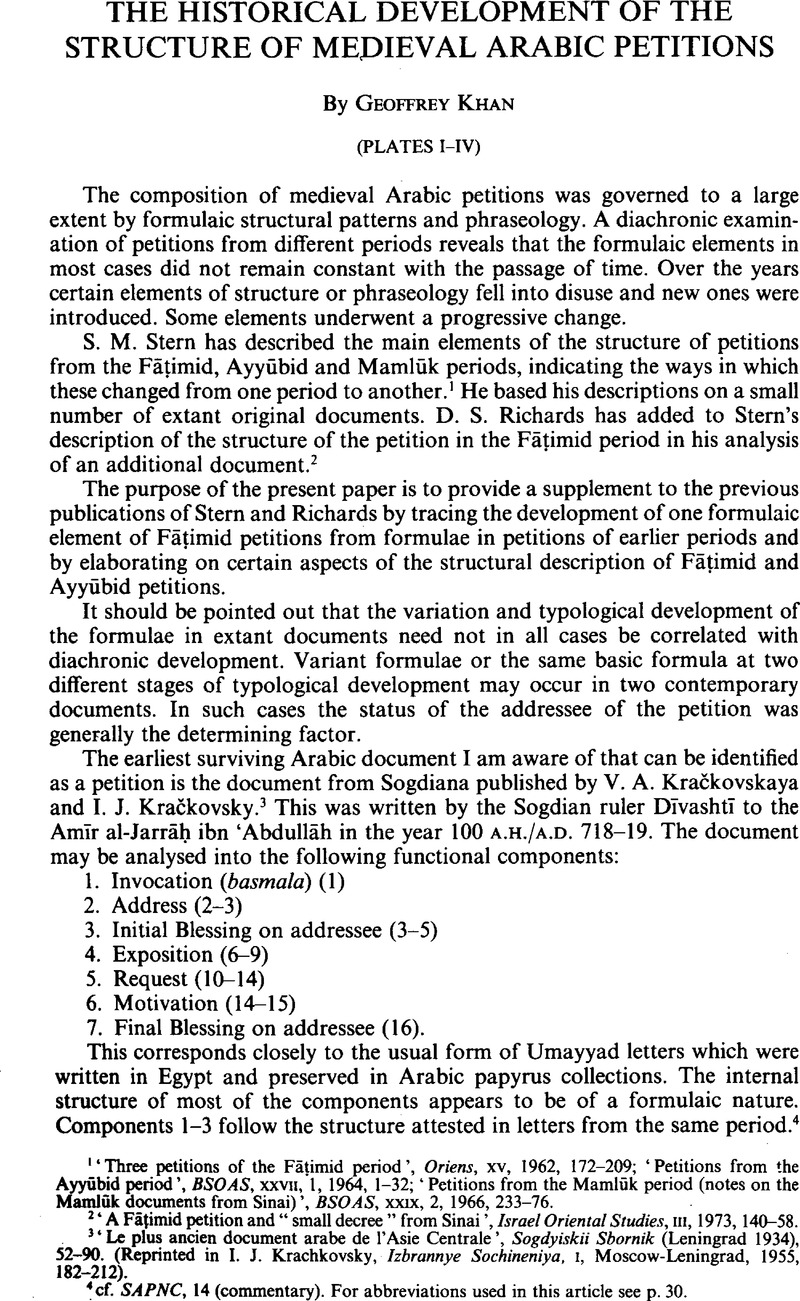 COPYRIGHT: © School of Oriental and African Studies, University of London 1990

7 The sense of lī which is intended here is often expressed in blessings in other papyri moreexplicitly by the verb ’amta‘a, e.g. ’amta‘ ani allāh bi-ṭūlmuddatika (APRL, VII, 31,1. 2).

8 It is not clear what precisely the writer was referring to by the term al-wakāla.

10 Literally; ‘to convey to me that which he would send to me of produce (mughallatan).’

11 The same expression is found in other Arabic papyri, e.g. Michaelides P. A 568 (bimāyuthībuhu allāh bihi al-janna 'in shā’a allāh).

12 Literally ‘I shall pray for preservation for you ⃛ as a supplication’. The ‘Tomb’ and the ‘Minbar’ are those of the Prophet in the Mosque of the Tomb in Medina. These are frequentlyvisited by pilgrims in conjunction with the ḥajj to Mecca.

13 The meaning seems to be that the writer has performed the pilgrimage once for himself andonce as the representative of the addressee's father.

15 For an analysis of the features of script which can be used to date Arabic papyri, cf. SAPNC, introduction.

22 For the use of the word ‘inda with this sense in medieval Arabic accounts cf. Little, D, Acatalogue of the Islamic documents from al-Ḥaram aš-Šarīn Jerusalem (Beirut, 1984), 361.

24 Most Genizah fragments which are cited in this article will be published in my forthcomingbook, Arabic documents from the Cairo Genizah.

25 According to literary sources a similar construction (wa-li-mawlānā ‘uluww al-ra’y fī⃛) wasused in fourth/tenth century Irāq, see below. One must take into account that none of the earlier extant papyrus petitions written in Egypt are addressed to the court of the political ruler, with theexception of APEL, 172, to the caliph al-Mu‘tazz billāh, but only the initial blessing and the addressof this document have survived. The possibility cannot be excluded, therefore, that an expressionsuch as li-mawlānā al-ra'y al-‘ālī fī kadhā wa-kadhā was used in petitions written in pre-Fāṭimid Egypt which were addressed to the political ruler. Nevertheless a diachronic development in the use of the 'in ra'ā/ra'ayta construction did occur. As will be shown below, by the Fāṭimid period the 'in ra'ā/ra'ayta formula began to be felt as inappropriate in petitions addressed to people of higher authority than the writer. It was gradually dropped in petitions and replaced by other formulae.

26 i.e. the caliph. The feminine form taṣaddaqat refers to the ‘caliphal presence’ (al-ḥaḍdra).

27 For examples, cf. the documents published by Stern, , in Oriens, xv, 174–83. Cf. also Khan, ‘Apetition to the Fāṭimid caliph al-Āmir’ (to appear in the Journal of the Royal Asiatic Society).

35 This occurs, for instance, in reports sent to the Sulṭān (vm, 54) and also in correspondence to high dignitaries (vm, 172). Another related phrase which occurs in high level Mamlūk correspondence is wa-l-ra'y al-‘ālī ‘a'lāhu allāhu ta'ālā ‘a'lā (vm, 175).

41 I am grateful to Dr. Ragheb, Y. for drawing this document to my attention.

48 In the blessing of the petition to al-Hākim, Louvre Fonds Rémondon 1, the initial element ṣalawāt is replaced by salām. This is also attested in the document T-S AS 180.140, which appears to be some kind of prayer for al-Mustansir.

49 cf. Goitein, S. D., ‘Prayers from the Geniza for Fatimid caliphs, the head of the Jerusalem Yeshiva, the Jewish community and the local congregation’, Studies in Judaica, Karaitica and Islamica presented to Leon Nemoy on his eightieth birthday (Bar-Ilan, 1982), 57. See also the preceding note.

54 I have identified two other Genizah fragments of petitions opening with a blessing on al-Ḥāfiẓ (T-S AS 150.195 and AS 184.198), but these do not preserve enough text of the original document to allow one to establish who the addressee was.

58 Ibn Muyassar, 89 ff., Ibn Zāfir, 102 ff. The Genizah has preserved drafts of another petition to Ibn al-Salar (T-S 13J20.5—in Hebrew script), one of which contains the date 545/1150. The opening formulae, however, are omitted. They were no doubt added in the final version of the document.

The historical development of the structure of medieval Arabic petitions

Bulletin of the School of Oriental and African Studies
×