Home
The British Journal for the History of Science

The Tyranny of Abstractions 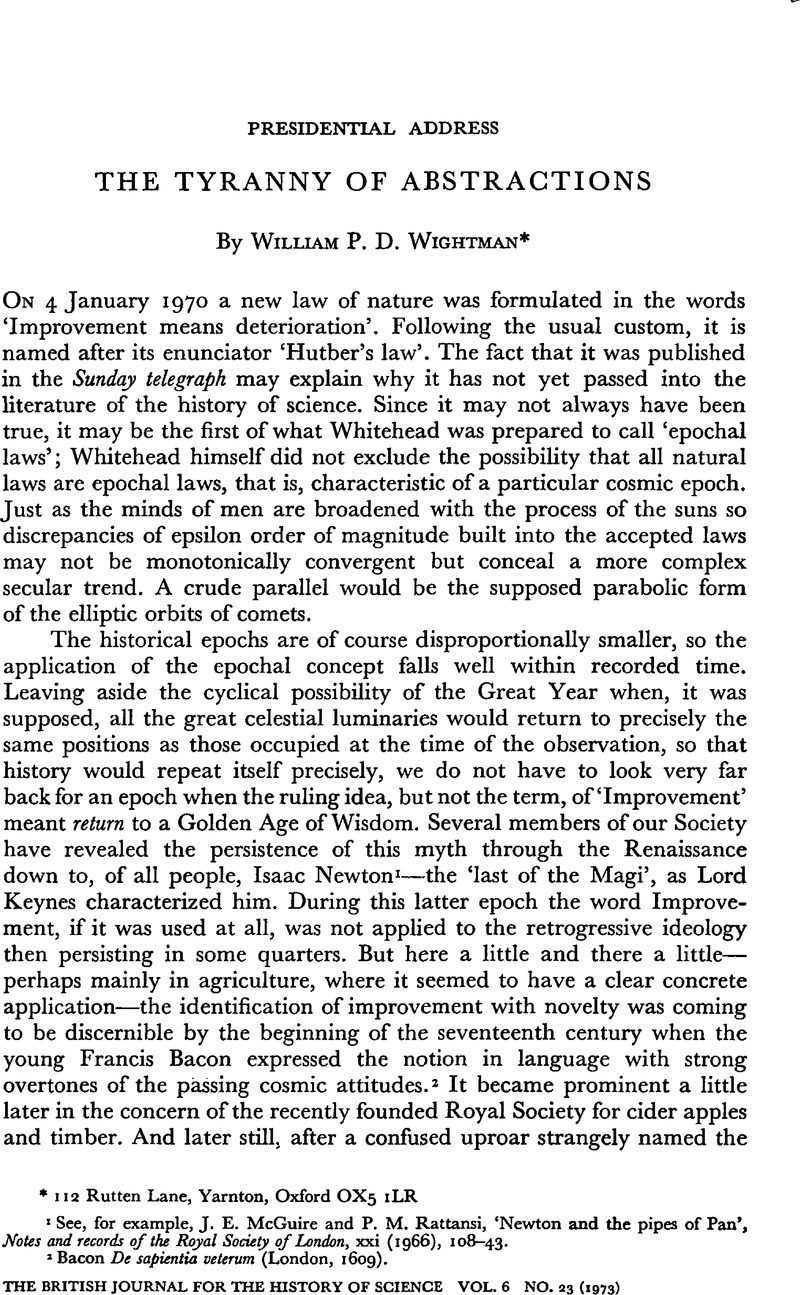 COPYRIGHT: © British Society for the History of Science 1973

3 I am currently engaged on a critical essay in which the basis of this judgment is discussed.

5 Whittaker, E. T., ‘Some disputed questions in the philosophy of the physical sciences’, Proceedings of the Royal Society of Edinburgh, Section A, lxi (1942), 160–75.

15 In the Everyman edition of An anatomical disquisition on the motion of the heart & blood in animals (London, 1923), the relevant passage is on p. 142.

18 ‘Discours préliminaire des éditeurs’, in the Encyclopédie, ou dictionnaire raisonné des sciences, des arts et des métiers, i (Paris, 1751), pp. vi and vii. A more detailed study of d'Alembert reveals an inconsistency of this judgment with his life-long aim to ‘prove’ that ‘geometry’ (to which he believed he had ‘reduced’ mechanics) alone gives certain knowledge. I can but suggest on the one hand that he was hoping to persuade as large a public as possible to invest in the Encyclopédie, and on the other that the inconsistency is only apparent. Medicine was not, nor ever could be, ‘exact’; but to force upon it the deductive, abstract method of mathematics was a bar to the attainment of such a degree of ‘knowledge’ as was possible. See the excellent biography, Jean d'Alembert. Science and the Enlightenment (Oxford, 1970) by Thomas L. Hankins, who, however, does not refer to this matter specifically.

19 Morrell, J. B., ‘The University of Edinburgh in the late eighteenth century: its scientific eminence and academic structure’, Isis, lxii (1971), 158.

21 For an illustration of this tradition see, for example, Oken, Lorenz, Elements of physiophilosophy, trans. Tulk, A. (London, 1847).

24 The English word ‘science’ in its present connotation was in fact first used in 1796 by Richard Kirwan; see the passage quoted in the OED entry on ‘science’: ‘Previous to the year 1780 mineralogy though tolerably well understood as an art could scarce be deemed a science.’ Much the same might have been said about chemistry, botany, geology, for example, but mechanics, optics, sound, static electricity, and (to a lesser extent) heat were firmly founded as departments of the science of physics. By the time Hegel was writing, only chemistry, and that but partially, could compete with physics.

26 Cf. Joan Robinson's comment: ‘An equilibrium system, by its very nature, is cut off from reality. It is useless to interpret history in terms of it and illegitimate to appeal to history for evidence to support it. All it can do is to display the logical relations generated by its assumption’; from her Collected economic papers, (3 vols., Oxford, 1951–1965), iii. 19. See further Beer, Stafford, ‘The world, the flesh and the metal: the prerogatives of systems’, Nature, ccv (1965), 223–31; the whole article might be regarded as an attack on the ‘futility of abstraction’.

27 ‘Either your experience is of no content or it is a perceptible amount of content or change. Your acquaintance with reality grows literally by buds or drops of perception’ (William James; quoted in Whitehead, , op. cit. [12], p. 94). James comments: ‘Intellectually [i.e. by abstraction] and on reflection you can divide these into components, but as immediately given they come totally or not at all.’

29 This is what I said ‘in my haste’. I now recognize that in respect of economics my remark was far too sweeping. I am again indebted to Mrs Robinson, who, in ‘What remains of Marxism’ (Robinson, , op. cit. [26], iii. 158–66) argues persuasively that comparison with the neo-classical (pre-Keynesian) equilibrium theory is ‘highly favourable to Marx’. But in ‘prophesying’ the collapse of capitalistic society on the analogy of the past, Marx was mixing somewhat dubious history with political ideology. Nevertheless, once more to plunder Mrs Robinson (‘Marxism, religion and science’, op. cit. p. 155): ‘You have nothing to lose but [sc. under continuing capitalistic expansion] the prospect of a suburban house and a motor car would not have been much of a slogan.’

31 To pick out lapidary phrases from Hegel's works is notoriously to invite misunderstanding; but the Zusatz on pp. 18–20 of Miller, A. V.'s recent Hegel's philosophy of mind (Oxford, 1971) is as free from danger of misunderstanding as most. A ‘sympathetic’ refutation of materialism will he found on p. 34.

The British Journal for the History of Science
×

The Tyranny of Abstractions

The British Journal for the History of Science
×