Observations of the dynamic structure of snow avalanches

During two winters, 1990–92, the dynamic structures of snow avalanches were studied in western Norway. Artificially released wet-snow avalanches ran down the avalanche chute and stopped in front of the retaining dam. Running velocity distributions were obtained not only by video tape recorder, but also by various other recording instruments. Internal velocity was derived for the last avalanche by frequency analysis of impact pressure and optical sensor data. The vertical velocity shear of the avalanche flow has been estimated to be in the range 1–10 s−1.

In spite of long and sustained efforts to reveal the structure and behavior of snow avalanches, reliable data obtained so far are still inadequate. Especially lacking are those data associated with the internal and dynamic structures. In the winters of 1990–91 and 1991–92 a Japanese-Norwegian joint project was undertaken which aimed to collect such data related to the dynamic structures of snow avalanches. The experimental site, Ryggfonn, is located near a field research station in Glasdalen, western Norway, where the Norwegian Geotechnical Institute (NGI) has carried out full-scale avalanche experiments since 1981.

Large flowing avalanches did not occur during the observation periods, when the climate was rather mild. But on 20 March 1991 and on 20 May 1992, artificially released avalanches ran down the avalanche chute and reached the dam, and various data were obtained. This paper reports those two avalanches and gives some results of the preliminary analysis.

The avalanches released artificially in Ryggfonn start at 1530 m a.s.l. and run down some 1600 m on an avalanche path of 28° mean slope (Fig. 1). The vertical drop is about 900 m. A retaining dam 15 m high and 75 m wide has been constructed in the avalanche runout zone, and a steel mast 6.5 m in height erected on it. Above the dam, 230 m up the avalanche path, is a concrete structure 4.5 m high and 0.6 m wide. The impact pressures of the avalanche are measured by three load cells. A further 320 m upslope from the dam is a tubular steel tower 10 m high and 1.3 m in diameter, on which strain gauges for measuring shear and moment forces, mechanical pressure indicators and a geophone were mounted. More detailed information of the measurement system has been reported by Norem and others (Reference Norem, Kvisterøy and Evensen1985).

In addition to these instruments, the following were set up in the winter 1990–91: one video camera installed in front of the avalanche path and one near the instrument hut; an ultrasonic anemometer on top of the dam tower; a seismograph on the dam; an air-pressure sensor on the dam. Furthermore, for the purpose of investigating the internal structures of the avalanche, additional sensors were set in the winter 1991–92. Figure 2 shows a new measuring apparatus mounted on the tubular tower (small impact-pressure sensors mounted 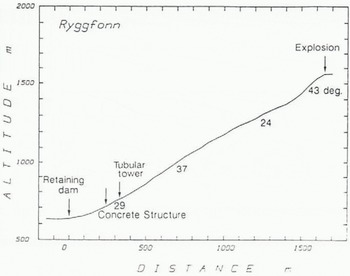 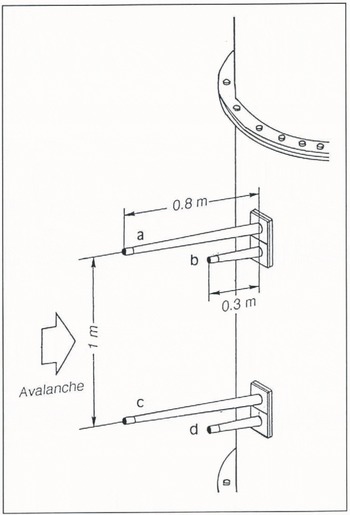 Fig. 2. Schematic representation of the impact-pressure sensors (a-d) set on the tubular tower.

with the horizontal distance of 50 cm ). Figure 3 shows an apparatus on the concrete structure comprising small impact-pressure sensors with the distance of 50 cm and optical sensors, which measure the reflectivity of light and obtain density variation as well as internal velocity.

The seismograph on top of the dam recorded both the time of explosion and the main vibration, which is assumed to correspond to the time when the avalanche hit the front of the dam (Fig. 4). This time difference is 69 s, which gives an average velocity of 22 ms−1. The avalanche-front velocities, estimated by analyzing the video tapes and the hitting time of different sensors, are given in Figure 5. Velocities obtained both by video tapes and other instruments showed good agreement. The velocity of the avalanche was over 25 ms−1 in the construction area, and decreased to about 20 ms−1 in front of the dam. The video and other recordings indicated that the front velocity had only a minor reduction before the avalanche stopped suddenly in front of the dam. The highest impact pressure on the load cell was 320 kPa, and the maximum shear and moment at the steel tower were 1149kN and 3250 kNm respectively. The recordings of the ultrasonic anemometer on top of the dam did not show any distinct signals. Some 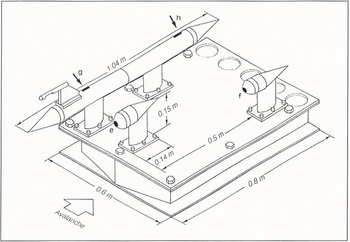 Fig. 4. Recording of ground vibration during the avalanche on 20 March 1991.

of these data have been reported by Norem and others (Reference Norem, Kristensen and Tronstad1991).

This avalanche was released by detonating 50 kg of dynamite placed on the snow surface in the starting zone. It was a wet-snow avalanche and its velocity was much slower than that of 20 March 1991. The snow in the first part of the avalanche seemed to stop after passing the concrete structure, but the following part had enough velocity to reach about 30 m in front of the dam. The avalanche debris was composed of wet snow balls. Figure 6 shows recordings of the impact pressures on the tower (A) and the concrete structure (C), and the light reflectivity (B) measured by an optical sensor set on the concrete structure.

The first impact on the tower was observed at 1 s and lasted for 2 s (Fig. 6A). In the following 20 s only spikes caused by the impact of snow balls are seen. At 24 s a dense flow considered to be a mixture of snow balls and fluidized snow reached the tower and showed high impact pressures. On the other hand, the front of the flow arrived at the concrete structure at 9–10 s (Fig. 6B and C). Both light reflectivity, which is a measure of the relative-density variation, and impact pressure showed rather low signals until 32 s. The high impact pressure was found about 23 s after the first impact, which seemed to correspond to the arrival of the dense flow. 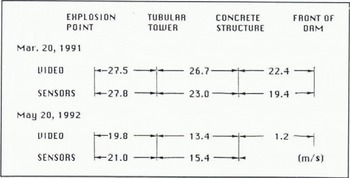 Fig. 5. Front velocity of the avalanches estimated from the video-tapes and the recordings from the sensors.

Front velocities calculated with the video and other recordings, which are given in Figure 5, agreed well with each other. It is conjectured that the velocity exceeded about 20 ms−1 near the tower but was less in the construction area. In particular, it flowed very slowly from the concrete structure to the dam area. No snow clouds developed, nor did the recordings of the ultrasonic anemometer on top of the dam show any distinct variations. 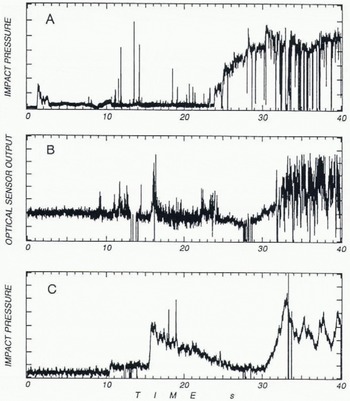 and a cross-correlation function was calculated for various pairs of the data. The average internal velocity was obtained from a combination of the lag time that gave the highest correlation and the distance between the two measuring points. Further details of the analysis method have been given in Nishimura and others (Reference Nishimura, Maeno and Kawada1987). Calculated results for pairs of impact pressure data on the tower (a-b and c-d) are presented in Figure 7. Time in the figure is the same as that in Figure 6. The internal velocity about 4 s after the avalanche front passed became fairly slow relative to the front velocity shown in Figure 5. The maximum velocity appeared at 24 s, when the dense 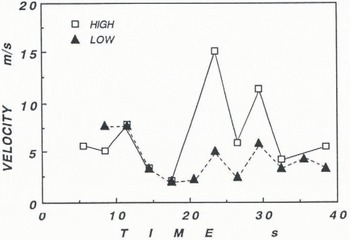 Fig. 7. Internal velocity of the avalanche on 20 May 1992. Squares and triangles refer to the velocities calculated from the pair recordings of impact pressures, a and b, and c and d, respectively (Fig. 2).

part of the flow arrived. We may reasonably conclude that the impact pressure peaked at 23 s after the passage of the front, because of not only the high density but also the high velocity.

The internal velocity in the high position was generally faster than that in the low position, and was particularly distinct in the dense flow region. Taking into account the vertical distance of 1 m between each set of impact-pressure sensors, the vertical velocity shear of the avalanche has been estimated to be in the range of 1–10 s−1. This value is a significant parameter in the avalanche dynamics (Nishimura, Reference Nishimura1990) and the value obtained here agrees well with that of 1–7 s−1 in the Kurobe Canyon (Nishimura and others, Reference Nishimura, Narita, Maeno and Kawada1989). Internal velocities at the concrete structure are shown in Figure 8. Calculated velocities from the recordings of impact pressures (e and fin Figure 3) roughly agree with those obtained from recordings of optical sensor output (g and h).

This Norwegian-Japanese collaboration has been made possible by financial support from the International Scientific Research Program of the Ministry of Education, Science and Culture, Japan, and from the Royal Norwegian Council for Scientific and Industrial Research. The observation at Ryggfonn was carried out with the helpful collaboration of the following members: K. Izumi (Research Institute for Hazards in Snowy Areas, Niigata University), K. Kawada (Toyama University), 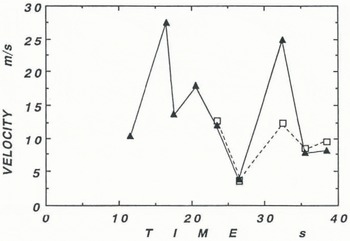 Fig. 8. Internal velocity of the avalanche on 20 May 1992. Squares refer to the velocities calculatedfrom the recordings of impact pressures (e and ƒ in Fig. 3), and triangles to those calculated from recordings of optical sensor output (g and h).

Observations of the dynamic structure of snow avalanches
×

Observations of the dynamic structure of snow avalanches
×

Observations of the dynamic structure of snow avalanches
×
×