During the Norwegian Antarctic Research Expedition 1978–79, temperature measurements of a number of icebergs and the surrounding surface water were made, using an airborne precision radiation thermometer. All icebergs were embedded in cold water-masses with temperatures generally below 0°C and thus the observed temperature anomalies were relatively small, ΔT ≈ 1 deg. Examples of the influence of icebergs on the sea surface temperature including a possible example of upwelling will be shown. The temperature of the snow-covered iceberg surface was almost constant with individual variations ΔT ≈ 0.2 deg. Local minima indicative of snow-covered crevasses were observed.

Publication No.23 of the Norwegian Antarctic Research Expeditions (1978–79)

In temperate and high latitudes the vertical heat flux from the sea surface to the atmosphere is usually positive. Immediately below the air-sea interface the transfer of heat (and momentum) is mainly effected by molecular processes and the vertical temperature gradient is constant and relatively large.

Below this thin viscous sub-layer the vertical transfer is mainly due to turbulent mixing and the temperature gradient is small. The result is that the upper few millimetres of the surface water are typically a few tenths of a degree Celsius cooler than the water below, as demonstrated by Woodcock (1941). With radiometric techniques it is possible to investigate in detail the temperature of the surface itself, i.e. the skin temperature, following on the earlier work of Ball (1954), Ewing and McAlister (1960), McAlister (1964), and McAlister and McLeish (1969). The thin viscous sub-layer giving rise to the difference between bulk temperature and skin temperature undergoes rapid changes due to the presence of convection, wind, waves, etc. The radiation signal therefore exhibits large fluctuations, as, for example, shown by Simpson and Paulson (1980). The task of revealing bulk surface temperature signals from observations of radiation temperatures is further complicated by the fact that this bulk surface temperature signal is presumably weak. This is due to the near-freezing temperatures of the water mass in which the icebergs are embedded.

On a smaller scale inhomogeneities are also due to drifting sea ice in the presence of wind. Under freezing conditions there is a tendency for ice crystals to form behind isolated chunks of ice, often forming a line of ice crystals downwind. The radiation temperature from such areas may be considerably lower than in the neighbouring open water.

The measurements were made using the precision radiation thermometer PRT-5 manufactured by Barnes Engineering Co., Connecticut, U.S.A. This instrument measures radiation in the 8–14 µm region. The field of view is 2° and the response time 50 ms. The instrument was provided with a 15 cm-long insulated tube to prevent unwanted ventilation of the sensor and was then mounted under a Bell Jetranger helicopter with the tube axis vertically. The recordings were made on a paper-strip chart recorder. The temperature variations in the area of observations were small, typically below 2deg, and the sensitivity was therefore increased by feeding the signal into a bridge circuit. The instrument was calibrated before and after each flight for the ice-water zero point, taking the necessary precautions to obtain stable readings. The internal reference point was recorded at intervals during the flight. Corrections due to absorption by carbon dioxide in the air column have been neglected due to the low flight level and the low air temperatures (Saunders 1970). The spatial resolution ΔX depends on the speed of the vehicle V, the observation height h, and the response time Δt, of the instrument or the recorder (whichever is highest). Denoting the field of view with α(rad) the spatial resolution is ΔX ≈ αh provided V<αh/Δt. At higher speeds the resolution approaches VΔt. With typical values: h = 30 m, Δt = 0.5 s, α = 3.5 × 10−2 rad we obtain ΔX ≈ 1 m when V < 20 m s−1. If we wish to retain this spatial resolution on the paper-strip chart (where ΔX p ≈ 1 mm) then the paper speed needed is where V p where

Two examples will be discussed, (i) Iceberg no.7. This icebcrg was visited on 4 February 1979 at 11 00 GMT. There was partial cloud and a light breeze, and the upper sea-surface layer had warmed slightly. The surface temperature (bucket) was −0.1°C. The PRT-5 was flown as indicated in Figure 1, and the actual record is shown in Figure 2. Lower temperatures were recorded in the vicinity of the berg and there was a zone of distinctly colder water on the windward (eastern) side. The observed radiation temperatures were lower than the observed bucket temperature. We may try to explain the broad windward temperature minimum solely as a minimum in skin temperature. This would probably require the existence of a minimum in the wind-field on the windward side of the berg which is not very likely (Fig. 1). We therefore conclude that the observed minima in radiation temperature on the windward side of the iceberg correspond to minima in surface temperature due to the presence of the iceberg and, except for a small negative off-set, Figure 1 is interpreted as giving surface temperatures. 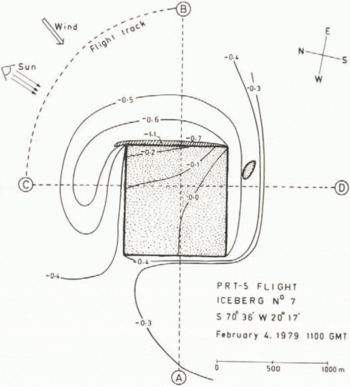 The broad windward temperature minimum is interpreted as the result of turbulent mixing of colder sub-surface water with the warmer surface water in a wake. The narrow, very cold zone on the windward side probably was the result of upwellig of cold water produced by cooling (and a little melting) at the vertical side of the berg. Figure 1 gives the impression of an iceberg in clockwise rotation. This is a plausible interpretation since we know from observations that icebergs may rotate. However, it should be kept in mind that the isotherms shown in Figure 1 have been drawn on the basis of observations along two lines only and other solutions are therefore quite possible.

The observed surface temperatures of the snow-covered iceberg were close to zero and there was a small horizontal gradient with temperatures increasing downwind. This may be attributed to the reduced wind-speed downwind due to the build-up of the frictional layer with increasing distance from the edge. The record from the iceberg surface also showed some fine structure with temperature anomalies of ≈ 0.1°C. These horizontal inhomogeneities may have been due to crevasses covered by a thin layer of snow.

(ii) Iceberg no.15. This iceberg was visited on 22 February 1979 at 15 00 GMT. The weather was overcast with a light breeze from E.N.E. The PRT-5 flight tracks are shown schematically in Figure 3 and the general hydrographic situation is demonstrated by the conductivity-temperature-depth (CTD) station in Figure 4. In Figure 5 is shown the PRT-5 records obtained during two flights at the distance of 30 and 100 m from the berg. The records show on the average lower temperatures for the track 30 m from the berg. This was at least partly due to a thin layer of ice needles forming a band of grease ice of varying width as indicated in Figure 3. A comparison of the tracks does not reveal significant temperature differences outside the grease-ice areas. The temperature fluctuations outside the ice areas were typically ± 0.2 deg whereas the presence of ice in this case produced temperature excursions of about 1 deg. It should be noted that the temperature differences measured between partly ice-covered and open-water areas depend largely on the properties of the ice cover and on the radiation balance. 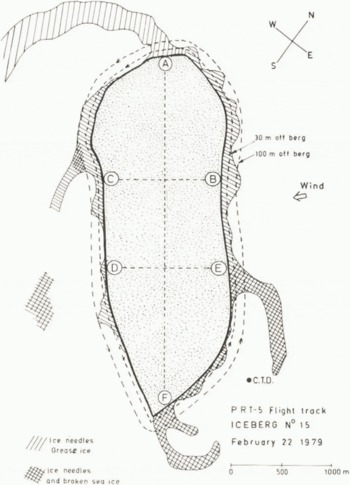 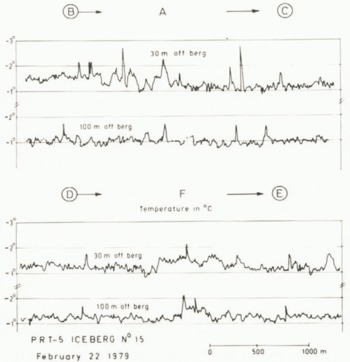 The records obtained from the flights across the iceberg are shown in Figure 6. The radiation temperature of the berg surface was in the range −6 to −7°C with typical fluctuations within ± 0.15 deg. These fluctuations were associated with horizontal scales of 50 to 100 m but there were also smaller oscillations on the 10 m scale. There were a few larger anomalies where the temperature dropped about 0.5 deg below the average. In the A-F section of Figure 6 there may be seen three such distinct features about 1 000 m apart. These may have been due to bands of crevasses in which the temperature was below the surface value.

Airborne radiometers represent powerful tools for the study of temperature anomalies of the sea surface and snow-covered surfaces in high-latitude regions. High-resolution relative values are easily obtained which yield information about the local dynamics of the water influenced by drifting icebergs and about crevasses etc. in the snow-ice surface. Reliable absolute values require careful calibrations at regular intervals combined with good surface observations.