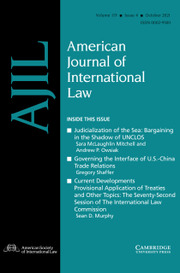 Use of Force, Arms Control, and Non-proliferation