A Response to Professors Meyer, Ohlin and Lorite Escorihuela 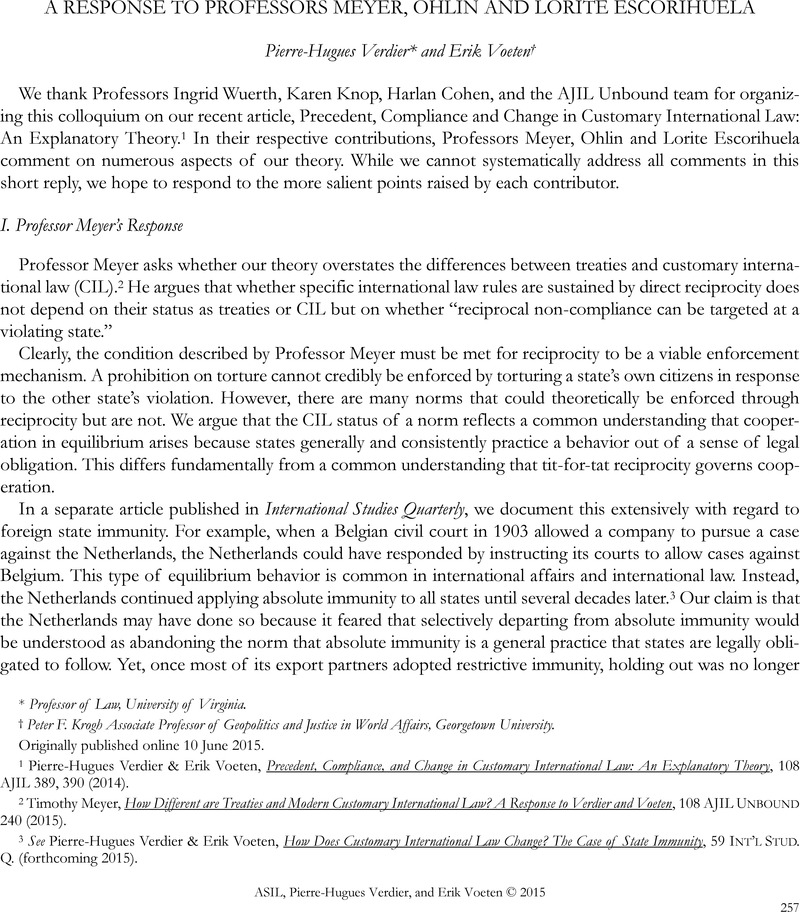 2 Meyer, Timothy, How Different are Treaties and Modern Customary International Law? A Response to Verdier and Voeten, 108 AJIL Unbound 240 (2015).

4 Professor Meyer cites instances of reciprocity in the context of diplomatic relations as a counter-example. However, reciprocity in this area often relates to privileges and immunities in excess of what is clearly required by law. This is consistent with the idea that recognizing a rule as CIL implies that it is prima facie applicable to all states, while ‘reciprocity is made to apply to concessions and privileges to which states are not entitled, or which they are not bound to grant, according to ordinaryinternational law.’ Lauterpacht, Hersch, The Problem of Jurisdictional Immunities of Foreign States , 1951 Brit. Y.B. Int’l L. 220, 228 . In somecases, states may want to respond in kind to clear violations of diplomatic law. As long as the rules were CIL, however, reciprocal responses ran the risk of undermining them. This may be one reason why states have chosen to codify this area.

5 Except of course to the extent permitted by self-defense—but permitting self-defense by an attacked state does not amount to applying the primary rule prohibiting the use of force on the basis of reciprocity. We develop this point in Verdier & Voeten, supra note 1, at 431-32.

6 Bykhovskaya, Ekaterina, State Immunity in Russian Perspective 146 (2008) states that the relevant provision was never applied in the Soviet Union or post-1991 Russia. Chinese sources note disagreement among Chinese scholars as to the applicability of reciprocity to foreign state immunity, and provide no instances of its application. See, e.g., Jin, Huang & Jingsheng, Ma, Immunities of States and their Property: The Practice of the People’s Republic of China, 1 Hague Y.B.Int’l L. 163 (1988); Lijiang, Zhu, State Immunity from Measures of Constraints for the Property of Foreign Central Banks: The Chinese Perspective, 6 Chinese. J. Int’l L. 67 (2007). We discuss the practice of other countries in Verdier & Voeten, supra note 3.

12 Ohlin, Jens David, The Assault on International Law (2015). We recognize that our descriptive account inevitably sets aside normative questions of interest to many scholars, and we thank Professor Ohlin for offering thoughts on some of these questions in his response.

14 It is also noteworthy that unlike most modern legal sources, the normsgoverning CIL formation explicitly incorporate reference to the actual practice and beliefs of states. The search for CIL thus has an empirical component, even in its own normative terms. In this sense, CIL is indeed ‘plausibly interested in describing the world.’ The fact that CIL explicitly stakes its claim to normativity on consistency with facts about the world makes descriptive investigation important to international lawyers, not just social scientists.

23 One might try to salvage this critique by distinguishing ‘good’ IL-IR scholarship from ‘bad’ rational choice accounts—presum-ably including our article—that undermine the normativity of international law. We doubt that Professor Lorite Escorihuela has such a distinction in mind. In any event, this argument would be untenable. First, virtually all recent IL-IR workincorporates some rational choiceconsiderations in constructing accounts of specific areas or phenomena.For example, SIMMONS, id. ,arguesthat because of lack of reciprocity and incentives to enforce, it does not seem rational for states to ratifyand comply with HRtreaties, thus setting up the puzzleshe sets up to solve—the same move Professor Escorihuela criticizes in our analysis. Second, while our theory is articulated in a rational choice framework, it also recognizes thatcentral role of sharedlegal understandingsof CIL inshaping cooperation, andallowsthat states and other actorscan be driven by normative preferences. (We returnto these points below.) Thus, like much contemporary IL-IR scholarship, it sets out to explain a specific aspect of international lawby developinga mid-level theorythat incorporates relevant insights from cognate theoretical perspectives where appropriate. It is unclear exactly what would make it fall on the wrong side of the alleged line. Third, even IL-IR scholarship that does not rest on rational choice assumptions, such as studies of international norm diffusion, often draws on non-legal factors—like the density of cultural links between countries—in pursuit of an ‘explanatory and predictive’ project. See, e.g., Linos, Katerina, The Democratic Foundations of Policy Diffusion (2013).

A Response to Professors Meyer, Ohlin and Lorite Escorihuela