Is the President Above Customary International Law? 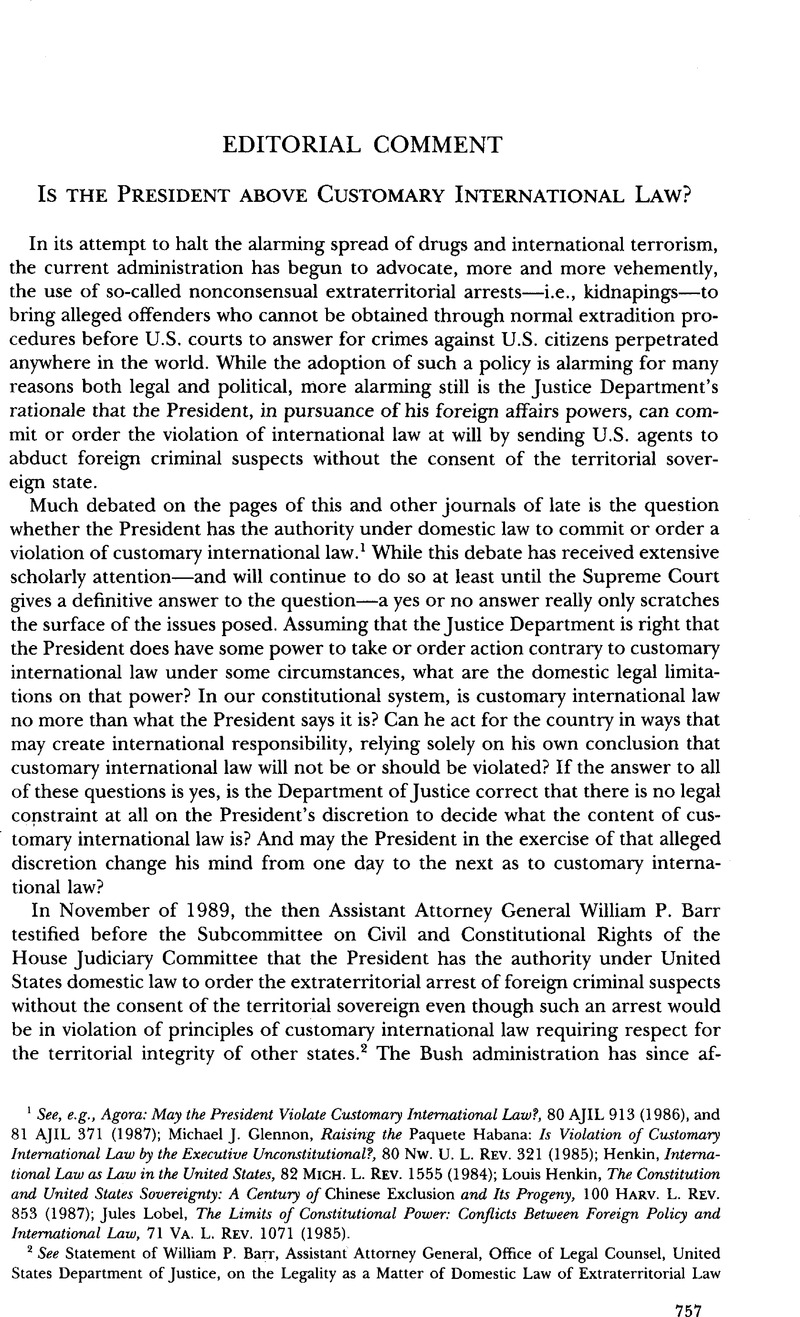 2 See Statement of William P. Barr, Assistant Attorney General, Office of Legal Counsel, United States Department of Justice, on the Legality as a Matter of Domestic Law of Extraterritorial Law Enforcement Activities that Depart from International Law, in FBI Authority to Seize Suspects Abroad: Hearing Before the Subcomm. on Civil and Constitutional Rights of the House Comm. on the Judiciary, 101st Cong., 1st Sess. 2 (1989) [hereinafter Barr Statement].

4 The 1989 Opinion has not been published and all requests for its production under the Freedom of Information Act have been refused on the grounds of various exceptions. In fact, the Justice Department has even refused to release the opinion to Congress. This author's challenge to the Justice Department's refusal of his FOIA request is currently pending in the U.S. District Court for the District of Columbia.

5 See Extraterritorial Apprehension by the Federal Bureau of Investigation, 4B Op. Off. Legal Counsel 543 (1980).

7 The 1980 Opinion also concluded that, in accordance with a long line of precedent, the FBI's enabling statutes should be construed consistently with international law to the extent possible, so long as there was no clear indication of a contrary congressional intent. 4B Op. Off. Legal Counsel, supra note 5, at 552.

14 The Treaty in Article V provides that “Each Party undertakes not to develop, test, or deploy ABM systems or components which are sea-based, air-based, space-based, or mobile land-based.” The Reagan administration argued that the United States could develop and test space-based antiballistic missile systems without violating the Treaty so long as they were based on “other physical principles” (such as lasers or particle beams) that did not exist at the time the Treaty was concluded in 1972. See Abram Chayes & Antonia Handler Chayes, Testing and Development of “Exotic” Systems under the ABM Treaty: The Great Reinterpretation Caper, 99 Harv. L. Rev. 1956 (1986).

20 Laurence H. Tribe, American Constitutional Law §4.4, at 221–22 (1988). For example, in 1982 Congress passed the Boland Amendment, prohibiting the President from using funds appro priated to the CIA or the Department of Defense to furnish support for military activities to the Nicaraguan contras. Department of Defense Appropriations Act of 1983, Pub. L. No. 97-377, §793, 96 Stat. 1865 (1982). U.S. military assistance to the contras was later determined by the International Court of Justice to be in violation of customary international law. See Military and Paramilitary Activities in and against Nicaragua (Nicar. v. U.S.), 1986 ICJ Rep. 14 (June 27), reprinted in 25 ILM 1023 (1986).

26 See, e.g., United States v. Decker, 600 F.2d 733, 738 (9th Cir.), cert, denied, 444 U.S. 855 (1979) (“We are less inclined to withhold review [of an executive treaty interpretation] when individual liberty, rather than economic interest, is implicated.”); United States v. Enger, 472 F.Supp. 490, 545 (D.N.J. 1978) (rejecting the United States' contention that it would be ultra vires for the court to disagree with the executive branch's interpretation of the Vienna Convention on Diplomatic Relations on the grounds that the article in question provided for flexibility, which only the executive branch can exercise); Conlin v. United States, 6 CI. Ct. 115, 136 (1984), rev'd on other grounds, 761 F.2d 688 (Fed. Cir. 1985), affd sub nom. O'Conner v. United States, 479 U.S. 27 (1986) (“Deference & is not the same as blind acceptance. There is no authority for the proposition that a court construing a treaty must follow the interpretation suggested by our government where that interpretation is unrea sonable or runs contrary to what the court determines was the intent of the high contracting par ties.”).

27 745 F.Supp. 599 (CD. Cal. 1990), aff'd sub nom. United States v. Alvarez-Machain, 946 F.2d 1466 (9th Cir. 1991), rev'd, 60 U.S.L.W. 4523 (U.S.June 15, 1992) (No. 91-712). In reversing the lower courts, the Supreme Court ruled that the Government's interpretation of the Treaty at issue was correct. However, the Court expressly noted that the defendant had not argued on appeal that principles of customary international law might provide an independent basis precluding the exercise of jurisdiction over him by U.S. courts. Thus, the Alvarez-Machain opinion leaves open the question at the heart of this Comment.

31 See, e.g., Jonathan I. Charney, The Power of the Executive Branch of the United States Government to Violate Customary International Law, in Agora, supra note 1, 80 AJIL at 913, 917.

Is the President Above Customary International Law?