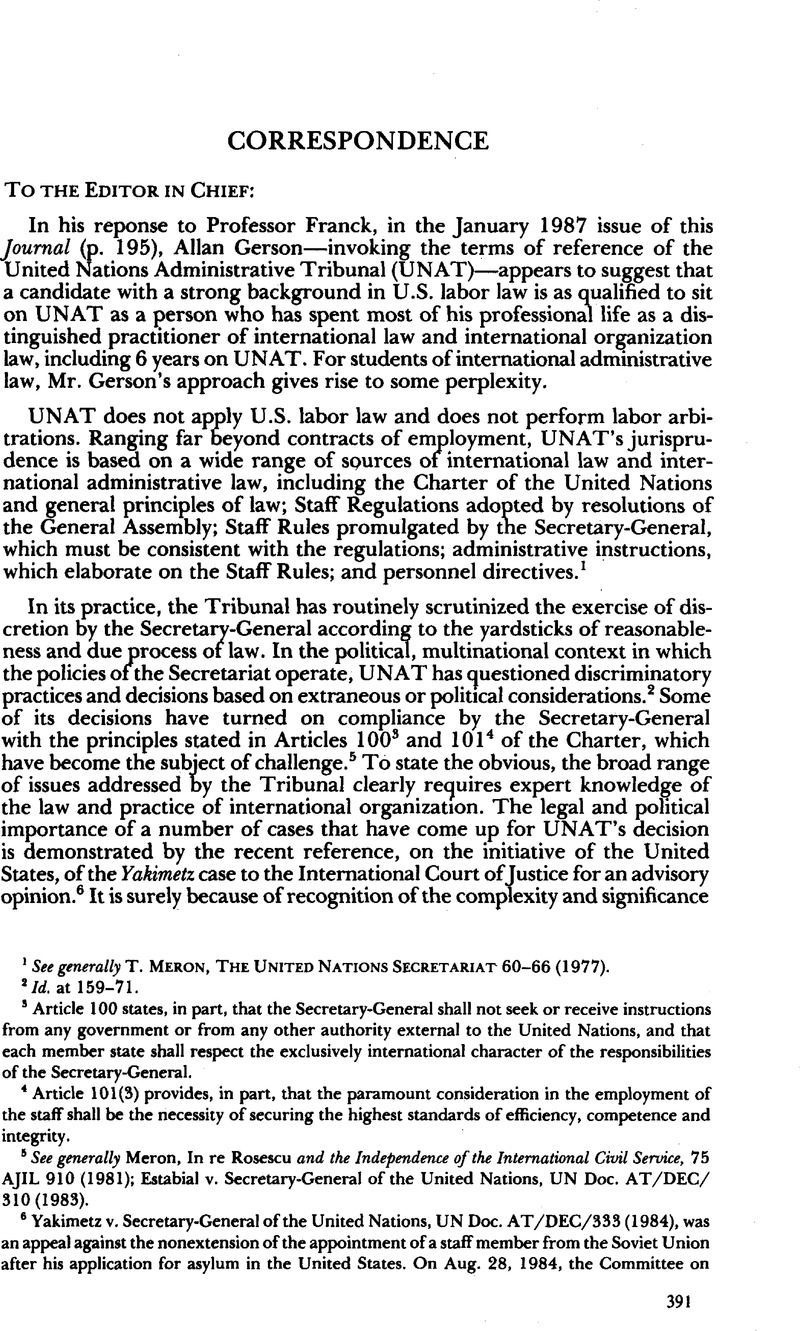 page 391 note 3 Article 100 states, in part, that the Secretary-General shall not seek or receive instructions from any government or from any other authority external to the United Nations, and that each member state shall respect the exclusively international character of the responsibilities of the Secretary-General.

page 391 note 4 Article 101 (3) provides, in part, that the paramount consideration in the employment of the staff shall be the necessity of securing the highest standards of efficiency, competence and integrity.

page 391 note 6 Yakimetz v. Secretary-General of the United Nations, UN Doc. AT/DEC/333 (1984), was an appeal against the nonextension of the appointment of a staff member from the Soviet Union after his application for asylum in the United States. On Aug. 28, 1984, the Committee on Applications for Review of Administrative Tribunal Judgments decided that there was substantial basis for the application for review. The International Court of Justice has not, as yet, pronounced its advisory opinion on the Yakimetz case.

13 Apparently intending rhetorical effect, Moore raises a variety of objections that have no bearing on the reliability of our methodology or the probity of the report’s conclusions. He complains, for example, that a public relations firm that had some relationship with the sponsoring organizations also had Maurice Bishop’s Grenada as a client. Similarly, he writes that Fox “may not even have been aware,” Reply, supra note 3, at 191 n. 16, of my meeting with Reichler and an Interior Ministry official, and that one of us—he does not specify which—“expressed doubts about the questioning of the other,” id. at 193. This comment considers only those of Moore’s remarks that have some bearing on the point he tries to establish.

26 Moore’s reliance on this interview is most interesting. See infra text accompanying notes 61–62.

45 This procedure, it is worth noting, comports with Professor Weissbrodt’s Proposed Draft Model Procedures for NGO Fact-Finding:

[I]t does not seem unreasonable to suggest that nongovernmental organizations should expressly state their fact–finding methodology at least in substantial reports on human rights situations. Obviously, every letter, appeal, press release, etc., could not contain such methodological statements—for reasons of economy and effectiveness. But major factual inquiries representing considerable effort and involving a substantial result, such as a report, might contain a sketch of the basic methodology used in deriving the report. Indeed, most sizeable NGO human rights reports do contain at least a paragraph or two concerning methodology used.

Weissbrodt, & McCarthy, , Fact-Finding by Nongovernmental Organizations in International Law and Fact-Finding in the Field of Human Rights 186, 216 (Ramcharan, B. ed. 1982).

Our report devoted six pages to describing the methodology used. As in the case of other proposed model rules, our report complies fully with each of Professor Weissbrodt’s 12 proposed guidelines, with one exception (paragraph 6). We did not indicate which of us conducted each interview. In fact, we probably conducted 90% of them jointly.

49 Franck, , Current Developments Note, 75 AJIL 163 (1981). These were drawn up after 4 years of study by a special subcommittee of the International Law Association, which consisted of representatives from Austria, Bulgaria, Cyprus, Ghana, Kenya, the Netherlands, Singapore, the United Kingdom, the United States and Uruguay. The 59th ILA Conference, held in Belgrade on Aug. 18–23, 1980, approved the rules by consensus. Id.

50 Id. at 165. Fox’s and my findings and conclusions were unanimous.

52 These are: (1) appointment, mandate; (2) organization of work; (3) procedure adopted; (4) facts alleged; (5) comments on allegations or rebuttals; (6) evidence obtained, including sources of evidence used and evidentiary criteria followed; (7) standards relied upon; (8) discussions of issues; (9) conclusions and recommendations; and (10) annexes, such as rules of procedure or comments of governments concerned. Van Boven, The Reports of Fact-Finding Bodies, reprinted in id. at 182.

54 I should note, however, that here the Vietnam blood-bath report is consistent with Moore’s approach. It contains no indication that the authors made any effort through cross-examination to determine the veracity of any of the persons interviewed. Rather, if they related enough detail, they apparently were assumed to be telling the truth. Desbarats & Jackson, supra note 35, at 176.