The Challenge to the Mandatory Death Penalty in the Commonwealth Caribbean 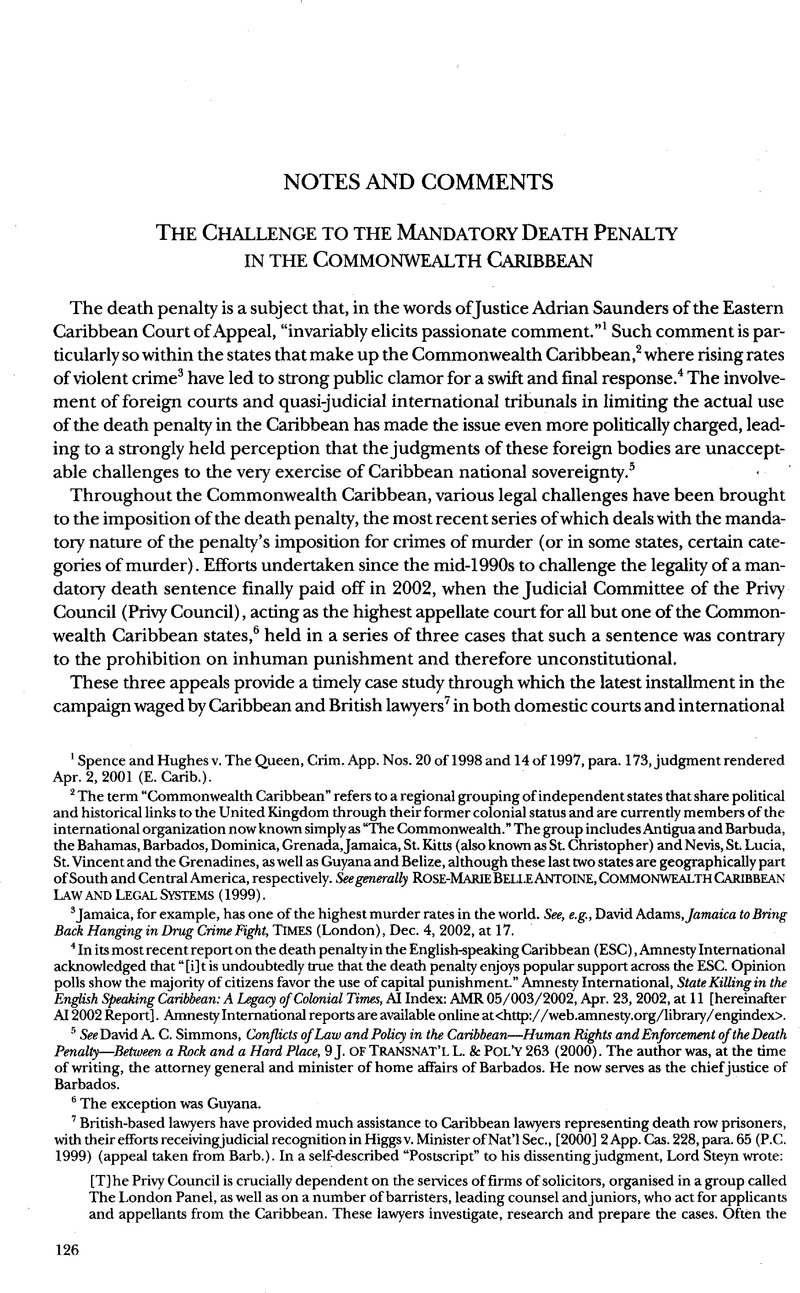 2 The term “Commonwealth Caribbean” refers to a regional grouping of independent states that share political and historical links to the United Kingdom through their former colonial status and are currently members of the international organization now known simply as “The Commonwealth.” The group includes Antigua and Barbuda, the Bahamas, Barbados, Dominica, Grenada, Jamaica, St. Kitts (also known as St. Christopher) and Nevis, St, Lucia, St. Vincent and the Grenadines, as well as Guyana and Belize, although these last two states are geographically part of South and Central America, respectively. See generally Rose-Marie Belle, Antoine, Common Wealth Caribbean Law and Legal Systems (1999).

5 See David, A. C. Simmons, Conflicts of Law and Policy in the Caribbean—Human Rights and Enforcement of the Death Penalty—Between a Rock and a Hard Place, 9 J. of Transnat’l l. & Pol’y 263 (2000). The author was, at the time of writing, the attorney general and minister of home affairs of Barbados. He now serves as the chief justice of Barbados.

6 The exception was Guyana.

[T]he Privy Council is crucially dependent on the services of firms of solicitors, organised in a group called The London Panel, as well as on a number of barristers, leading counsel and juniors, who act for applicants and appellants from the Caribbean. These lawyers investigate, research and prepare the cases. Often the issues are complex. The service rendered by these lawyers to the Privy Council, and to the cause of justice, is invaluable. Indeed without it the petitions and appeals from Caribbean countries could not be considered ‘ properly.

11 Amnesty International reports that” [t]iny, airless cells, with no natural light, thin mattresses or no bed at all, appalling food and almost no medical care are the norm for death row inmates across the region.” AI 2002 Report, supra note 4, at 28.

12 The provision of legal aid to those charged with serious offenses in the Commonwealth Caribbean is not guaranteed, although changes may come about as a result of the Privy Council’s decision in Hinds v. Attorney Gen. of Barbados, [2002] 1 App. Cas. 854 (P.C. 2001). On this decision, see Derek, O’Brien, The Flight to Free Representation in the Commonwealth Caribbean, 2 Oxford J. Common Wealth L. J. 197 (2002). See also Rose-Marie, Belle Antoine, International Law and the Right to Legal Representation in Capital Offence Cases—A Comparative Approach, 12 Oxford J. Legal Stud. 284 (1992) (noting that the UN Human Rights Committee has long recognized the problem of inadequate and unavailable representation for Caribbean death row prisoners).

13 Ramesh Lawrence, Maharaj, The Death Penalty: Legal and Constitutional Issues,9 Carib. L.R. 137 (1999). At the time of writing, the author was the attorney general for the Republic of Trinidad and Tobago.

20 The exception being Belize, which had a five-year transitional savings clause that is now spent See infra note 59.

23 See the speeches of Lords Scarman and Brightman in Riley, supra note 22. For Caribbean recognition of the significance of these dissents, see Maharaj, supra note 13, at 150.

26 According to the attorney general of Barbados at the time, Jamaica commuted at least 150 sentences, Trinidad and Tobago commuted 53, while Barbados commuted 9. Simmons, supra note 5, at 271 n.43. In Trinidad, the death sentence is commuted to one of seventy-five years imprisonment with hard labor. Trinidad: Government Yet to Decide on What to Do with Convicted Murderers, BBC Worldwide Monitoring, Feb. 19, 2003, available in LEXIS, News Library, Individual Reports File.

32 According to the Report of the Royal Commission on Capital Punishment (1949–1953), Cmnd. 8932, as cited in Reyes v. The Queen, [2002] 2 App. Cas. 235, 242B, para. 11 (P.C.) (appeal taken from Belize): “ [T]here is perhaps no single class of offences that varies so widely both in character and in culpability as the class comprising those which may fall within the comprehensive common law definition of murder.”

33 This was accomplished in the United Kingdom by the passage of the Homicide Act 1957, 5 & 6 Eliz. 2, ch. 11. The death penalty was subsequently abolished in 1965 by the Murder (Abolition of Death Penalty) Act 1965, ch. 71, although it remained on the statute book for treason and piracy with violence until 1998. See Crime and Disorder Act, 1998, ch. 37, para. 36. It was similarly abolished in the British territories of Anguilla, die British Virgin Islands, the Cayman Islands, Montserrat, and the Turks and Caicos Islands in 1991 by The Caribbean Territories (Abolition of Death Penalty for Murder) Order 1991, S.I. 1991 No. 988, with its last remaining vestiges in Bermuda and the Turks and Caicos Islands abolished in 1999 and 2002, respectively. See Browne, Anthony, Death Penalty Abolished on All British Territory, Times (London), Oct. 23, 2002, at 15.

36 Commonwealth Caribbean governments have argued that mitigating factors are considered postsentencing by mercy committees and other executive bodies responsible for hearing applications for pardon.

40 Optional Protocol to the International Covenant on Civil and Political Rights, supra note 29.

41 Charter of the Organization of American States, supra note 29.

43 American Declaration of the Rights and Duties of Man, supra note 29.

56 Spence was not appealed with respect to the mandatory nature of the death penalty because in the months following the decision of the Eastern Caribbean Court of Appeal concerning his appeal as to sentence, his appeal as to his conviction was allowed by the Privy Council, resulting in the matter being remitted to the St. Vincent courts for a possible retrial. [2001] U.K.P.C. 35. Spence was not therefore under a sentence of death at the time of the Hughes appeal because he was not convicted of any crime.

59 Section 21 of the Belize constitution provides that

Nothing contained in any law in force immediately before Independence Day nor anything done under the authority of any such law shall, for a period of five years after Independence Day, be held to be inconsistent with or done in contravention of any of the provisions of this Part (referring to Part II of the Constitution entitled “Protection of Fundamental Rights and Freedoms”).

Belize attained its independence on September 21, 1981.

63 R. v.Smith, [1987] 1 S.C.R. 1045 (Can.) (concerning the constitutionality of a seven-year minimum sentence for importing narcotics). The Privy Council also cited (at para. 30) the reference made in Smith to the earlier death penalty decision of Miller and Cockriell v. The Queen, [1977] 2 S.C.R. 680 (Can.) concerning the definition of cruel and unusual punishment as that which was “so excessive as to outrage standards of decency,” but failed to note that the holding in that case was that a mandatory death sentence for the killing of a police officer or prison guard was not cruel and unusual punishment under the 1960 Canadian Bill of Rights.

66 Mithuv. State of Punjab, [1983] 2S.C.R.690 (India), although in this case, the successful ground for challenging a mandatory death penalty was the right to life rather than the prohibition on cruel or inhuman treatment.

81 The cases were submitted to the inter-American system before Trinidad and Tobago’s denunciation of the American Convention on Human Rights took effect in May 1999.

82 One prisoner (Joey Ramiah) had been executed by Trinidad and Tobago while the case was pending.

92 Contrast this with Stanford v. Kentucky, 492 U.S. 361, 369 (1989), where the Supreme Court “emphasized that it is American conceptions of decency diat are dispositive” (emphasis added).

98 Id. at 2495 (incorporating a quotation from a previous decision). For a more optimistic view on the future use of foreign law, see Justice Ruth Bader Ginsburg, Remarks for the American Constitution Society Looking Beyond Our Borders: The Value of a Comparative Perspective in Constitutional Adjudication (Aug. 2, 2003), available at <http://www.americanconstitutionsociety.org/pdf/Ginsburg%20transcript%20final.pdf>. 99 Ong Ah Chuan v. Public Prosecutor, [ 1981 ] App. Cas. 648 (P.C. 1980) (appeal taken from Sing.), at 669. See Lester, Anthony, The Overseas Trade in the American Bill of Rights, 88 Colum. L.R. 537, 542 (1988).

102 For example, as of February 2003, there were thirty-four prisoners on death row in Trinidad and Tobago for whom the five-year period had expired, and another fifty-two prisoners with matters pending before the local Court of Appeal, the Privy Council, and the international human rights bodies. Trinidad: Government Yet to Decide on What to Do with Convicted Murderers, BBC Worldwide Monitoring, Feb. 19, 2003, available in LEXIS, News Library, Individual Reports File. There has not been an execution in Trinidad and Tobago since July 1999, although nine members of a drug gang were executed en masse in June 1999. Trinidad Hangs Killer, BBC News, July 28, 1999, available at <http://news.bbc.co.uk/1/hi/world/americas/405494.stm>.

105 The constitution of Barbados is found in the schedule to The Barbados Independence Order 1966, S.I. 1966 No. 1455, available at <http://www.barbados.gov.bb/bgis/government/barconstmain.htm>.

106 Given the difficulty in obtaining recent Caribbean legislation, the revised section 15 is reproduced below:

117 The proposed court, to be based in Trinidad and Tobago, will comprise two parts: a court of original jurisdiction to adjudicate trade disputes in the region and a court of appellate jurisdiction to serve as a final Court of Appeal for those states that wish this. See Antoine, supra note 2, at 227–49.

118 See Rawlins, Hugh, The Caribbean Court of Justice: The History and Analysis of the Debate (2000), available at <http://www.caricom.org/archives/ccj_rawlins.pdf>.

120 AI2002 Report, supra note 4, at 7. But see Shiel, P. G. F., Remarks Outrage Caribbean judges, Age (Melbourne), Apr. 15, 2003, at 4 (reporting Caribbean reaction to a remark by Geoffrey Robertson taken to mean that die court was being set up to carry out the death penalty).

* I wish to thank the School of Law at the University of Puerto Rico for the opportunity to present an earlier version of this paper as part of the School’s Spring 2003 guest lecture series. Thanks are also due to Grant Huscroft and Dale Ives for their comments and to Andrea Gonsalves for her excellent research assistance, funded with appreciation by the Law Foundation of Ontario.

The Challenge to the Mandatory Death Penalty in the Commonwealth Caribbean