The War Powers Resolution, Once Again 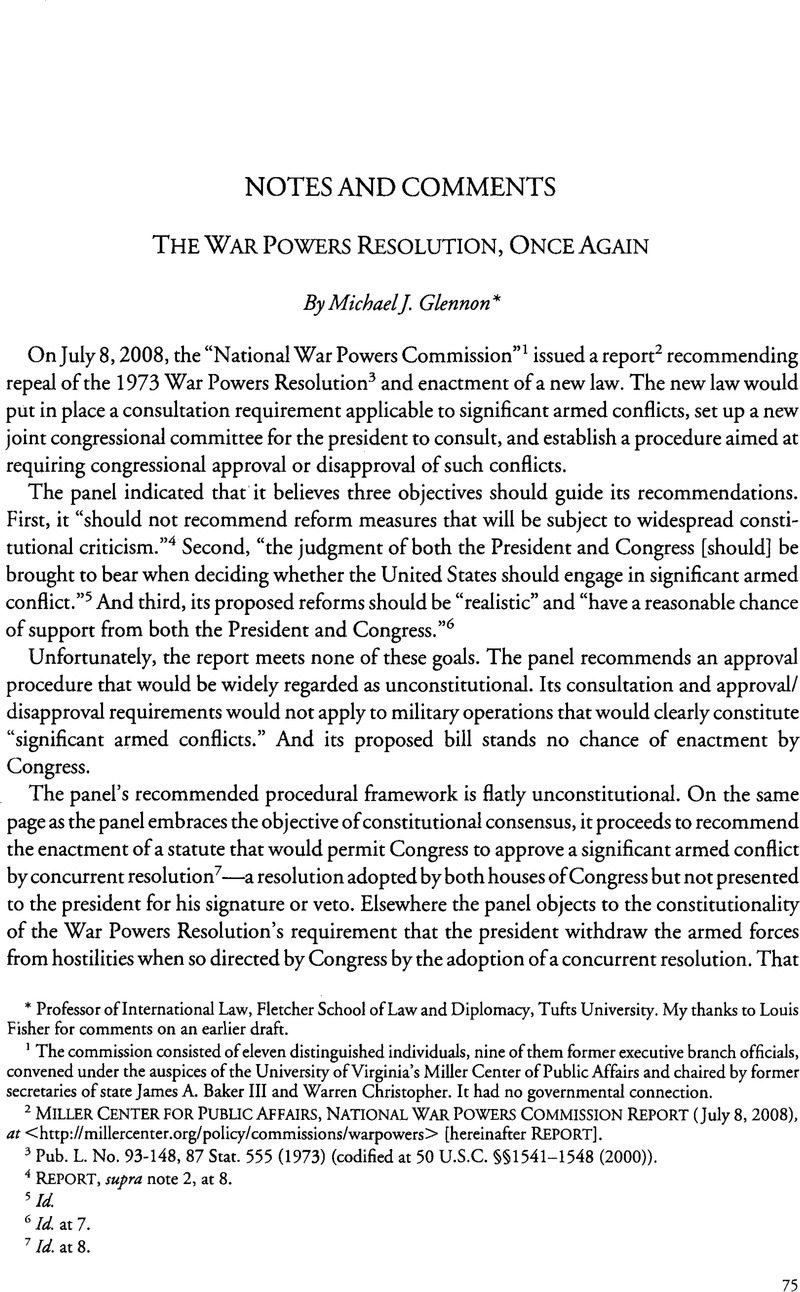 An abstract is not available for this content so a preview has been provided. Please use the Get access link above for information on how to access this content.
Type
Notes and Comments
Information
American Journal of International Law , Volume 103 , Issue 1 , January 2009 , pp. 75 - 82
DOI: https://doi.org/10.2307/20456722[Opens in a new window]
Copyright
Copyright © American Society of International Law 2009

1 The commission consisted of eleven distinguished individuals, nine of them former executive branch officials, convened under the auspices of the University of Virginia’s Miller Center of Public Affairs and chaired by former secretaries of state James A. Baker III and Warren Christopher. It had no governmental connection.

14 One is “irrational consistency,” the tendency of decision makers to ground conclusions upon previously formed images of reality, resulting in cognitive dissonance that causes a selective processing of information to conform to those presuppositions. See generally jEdwin, M. Smith Congressional Authorization of Nuclear First Use: Problems of Implementation, in First Use of Nuclear Weapons: Under The Constitution, Who Decides? 169, 187 (Raven–Hansen, Peter ed., 1987)Google Scholar. Another is “defensive avoidance,” an effort of decision makers to reduce the stress that derives from uncertainty by unconsciously exaggerating the attractiveness of one or more options, thus denying responsibility for making the wrong choice. See Robert, Jervis Perception and Misperception in International Politics 145–46 (1976)Google Scholar. A third is “groupthink,” a phenomenon of group dynamics that stifles the full discussion of all alternatives open to highly cohesive groups constrained by unarticulated premises of loyalty and consistency. See generally Irving, L. Janis Groupthink: Psychological Studies of Policy Decisions and Fiascoes (2d rev. ed. 1983)Google Scholar.

25 The panel’s recommended bill does not provide, as does section 8(d)(2) of the War Powers Resolution, that nothing in it may be construed as conferring any war–making authority upon the president that he would not have had in its absence.

35 The author served as special counsel to the subcommittee.

38 The author was a member.

39 The Constitution Project, Deciding To Use Force Abroad: War Powers in a System Of Checks and Balances (2005), at <http://www.constitutionproject.org/pdf/War_Powers_Deciding_To_Use_Force_Abroad.pdf.Google Scholar

40 The proposed procedure, while novel, is not entirely new. On May 15, 1978, the Senate Foreign Relations Committee reported a measure, S. 3076, 95th Cong. §502 (1978), that would have subjected an unauthorized agreement to a point–of–order procedure that would have cut off funds for the implementation of the agreement in question, but the measure was rejected by the full Senate. (Section 502 incorporated the Treaty Powers Resolution, S. Res. 24, 95th Cong. (1978).) The same measure, sponsored by Senators Dick Clark, Frank Church, Edward Kennedy, and Walter Mondale, had been introduced in 1976 as S. Res. 486, 94th Cong. (1976). Hearings were held on the measure by the Senate Foreign Relations Committee on July 21 and 28, 1976.

41 See Ely, John Hart Suppose Congress Wanted a War Powers Act That Worked , 88 Colum. L. Rev. 1379 (1988)CrossRefGoogle Scholar. For the argument that the use of force in Iraq is unconstitutional and an analysis of the political reasons that Congress does nothing about it, see Michael, J. Glennon A Conveniently Unlawful War , Pol’y Rev., Aug./Sept. 2008, at 75,Google Scholar available at <http://www.hoover.org/publications/policyreview/26119169.html.

Jacobs, Leslie Gielow 2010. Bush, Obama and Beyond - Observations on the Prospect for Fact Checking Executive Department Threat Claims Before the Use of Force. SSRN Electronic Journal,
Tiefer, Charles 2012. Can the President and Congress Establish a Legislative Veto Mechanism for Jointly Drawing Down a Long and Controversial War?. SSRN Electronic Journal,
Mulherin, Peter E. 2019. Going to war democratically: lessons for Australia from Canada and the UK. Australian Journal of International Affairs, Vol. 73, Issue. 4, p. 357.
Google Scholar Citations

The War Powers Resolution, Once Again
×

The War Powers Resolution, Once Again
×

The War Powers Resolution, Once Again
×
×