Article contents
Get access Rights & Permissions[Opens in a new window] 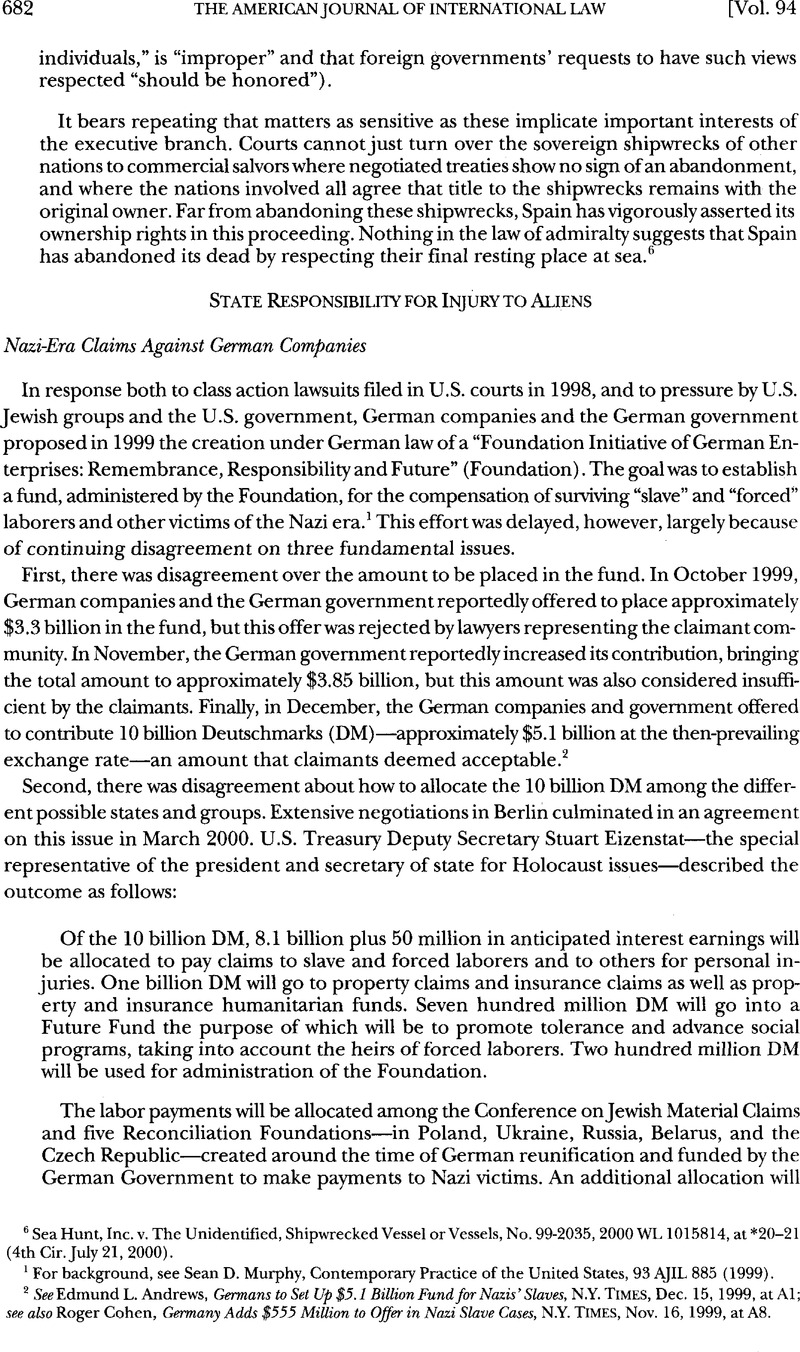 3 [Editor’s Note: It was later announced that this function would be performed by the International Organization for Migration (IOM). Thus, current residents of Belarus, the Czech Republic, Poland, Russia, and Ukraine file claims with the respective Reconciliation Foundations established by Germany in their respective countries. Current residents of most other countries either file their claims with the Conference on Jewish Material Claims (if the victim is Jewish) or the IOM (if the victim is non-Jewish).]

4 Stuart Eizenstat, Deputy Secretary of the Treasury and Special Representative of the President and Secretary of State for Holocaust Issues, Statement Before the Senate Foreign Relations Committee (Apr. 5, 2000), obtainable from <http://www.state.gov>; see also Cohen, Roger, Accord Reached on Compensation for Nazi-Era Forced Laborers, N.Y. Times, Mar. 24, 2000, at A9 Google Scholar. U.S. government officials reportedly estimated that there were about 700, 000 to 1.5 million surviving forced laborers (most of whom were not Jewish and were brought from the Soviet Union and east European states to work in factories in Germany or German-held territory) and some 240, 000 surviving slave laborers (about half of whom were Jews forced to work in abominable conditions in concentration camps). See Andrews, supra note 2.

Separately, in April 2000, a group of U.S. companies that had subsidiaries in Germany during the Nazi era also undertook to establish a fund to aid those who suffered from forced or slave labor. See Kahn, Joseph, A Fund Is Planned by U.S. Companies for Nazis’ Victims, N.Y. Times, Apr. 29, 2000, at A1 Google Scholar.

8 Joint Statement on the Occasion of the Final Plenary Meeting Concluding International Talks on the Preparation of the Foundation “Remembrance, Responsibility and the Future” (July 17, 2000). Annex A of the Joint Statement provides a definition of “German companies.” Annex B sets forth in a table the distribution plan for the funds. Annexes C and D provide lists of known World War II and National Socialist era cases pending in U.S. courts against German companies. Cases filed by plaintiffs’ counsel participating in the negotiations appear in Annex C, and by plaintiffs’ counsel not participating in the negotiations, in Annex D.

Texts of the documents signed in Berlin on July 17, 2000, as well as other documents relating to the Holocaust, are available at the Web sites both of the U.S. Department of State, <http://www.state.gov/www/regions/eur/holocausthp.html>, and of the U.S. Embassy in Berlin, <http://www.usembassy.de/dossiers/holocaust/>.

9 Agreement Concerning the Foundation “Remembrance, Responsibility and the Future,” July 17, 2000, U.S.-FRG, Annex B.