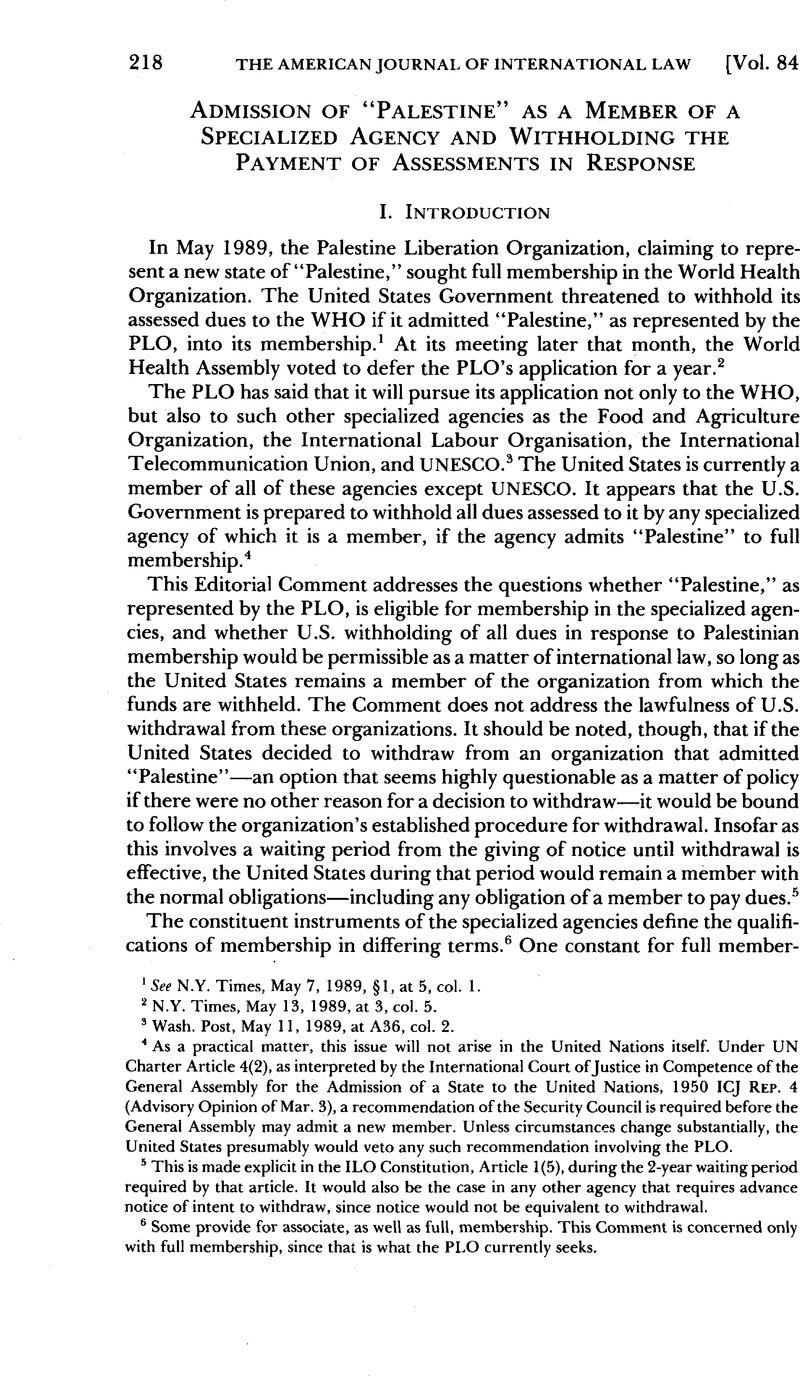 4 As a practical matter, this issue will not arise in the United Nations itself. Under UN Charter Article 4(2), as interpreted by the International Court of Justice in Competence of the General Assembly for the Admission of a State to the United Nations, 1950 ICJ Rep. 4 (Advisory Opinion of Mar. 3), a recommendation of the Security Council is required before the General Assembly may admit a new member. Unless circumstances change substantially, the United States presumably would veto any such recommendation involving the PLO.

5 This is made explicit in the ILO Constitution, Article 1 (5), during the 2-year waiting period required by that article. It would also be the case in any other agency that requires advance notice of intent to withdraw, since notice would not be equivalent to withdrawal.

6 Some provide for associate, as well as full, membership. This Comment is concerned only with full membership, since that is what the PLO currently seeks.

8 The FAO Constitution provides that the Conference may decide to admit “any nation which has submitted an application for membership and a declaration made in a formal instrument that it will accept the obligations of the Constitution as in force at the time of admission.” Constitution of the United Nations Food and Agriculture Organization, Oct. 16, 1945, Art. 11(2), 12 UST 980, TIAS No. 4803.

17 Even where the applicant is required to be a “state,” it does not inexorably follow that this means the traditional definition of a state. The meaning of a term or concept in one context is not necessarily its meaning in all contexts. For example, “treaty” has a narrower meaning in U.S. constitutional law than it does in international law. Compare U.S. Const. Arts. II, §2, and VI, with Vienna Convention on the Law of Treaties, Art. 2(1)(a), May 23, 1969, 1155 UNTS 331, reprinted in 8 ILM 679 (1969).

21 There has been debate about whether the United Nations has abandoned the express condition in UN Charter Article 4(1) that applicant states be, in the judgment of the Organization, able and willing to carry out the obligations of membership. See J. Crawford, supra note 15, at 140. The debate has centered on the relatively recent practice of admitting microstates. The question about their ability and willingness to carry out the obligations of membership has revolved primarily around their ability to maintain military forces at the call of the Security Council under chapter VII of the Charter. But the chapter VII obligations with which they could not comply are dead letters.

The microentities that have been admitted to the United Nations are “states,” no matter how small. See I. Brownlie, Principles of Public International Law 88 (3d ed. 1979). They are capable of carrying out the principal, ongoing obligations of UN membership. Thus, their admission to the United Nations does not imply abandonment (or nonexistence) of a condition based on ability to participate in the fulfillment of an organization’s purposes, if the means of fulfilling the purposes are taken as they exist at the time of admission.

26 At this writing, the General Assembly had not made a similar request regarding “Pales tine.” The point is that even if it does so, it would not have the same legal basis for its request as it did with the Council for Namibia.

32 See Cahier, L’Ordre juridique interne des organisations internationales, in A Handbook on International Organizations, supra note 11, at 237, 242–47; Zoller, The “Corporate Will” of the United Nations and the Rights of the Minority, 81 AJIL 610, 630–34 (1987). In the first UN admissions case, the International Court of Justice said, without identifying the source of law, “The political character of an organ cannot release it from the observance of the treaty provisions established by the Charter when they constitute limitations on its powers or criteria for its judgment.” Admission of a State to the United Nations (Charter, Art. 4), 1948 ICJ Rep. 57, 64 (Advisory Opinion of May 28).

35 The declaration says that the “State of Palestine … rejects the threat or use of force, violence and intimidation against its territorial integrity and political independence or those of any other State.” Palestine National Council’s Declaration of Independence, supra note 13, at 16, 27 ILM at 1671. The declaration relies on GA Res. 181 (II), 2 GAOR Res. 131, UN Doc. A/519 (1947), the General Assembly’s partition resolution, for the legitimacy of the Arab right to sovereignty and national independence in Palestine. The declaration thus recognizes the partition of Palestine between an Arab and a Jewish state, but it does not assert that the boundaries contemplated in the partition resolution have any current significance.

Yasir Arafat has acknowledged the right of all parties concerned in the Middle East conflict, including Israel, to exist in peace and security. See N.Y. Times, Dec. 15, 1988, at A19, col. 5 (transcript of Arafat statement).

Under Nuclear Tests (Austl. v. Fr.; NZ v. Fr.), 1974 ICJ Rep. 253 and 457 (Judgments of Dec. 20), unilateral declarations may create binding international obligations, at least if made by, or on behalf of, the government of a state. If “Palestine” were recognized as a state, it is likely that both the Palestine National Council’s declaration and the Arafat statement would meet the test of the Nuclear Tests cases.

37 Article 60(2)(c) gives another ground for suspension, but it applies when the treaty is of such a character that a material breach of one of its provisions radically changes the position of every party with respect to further performance of its obligations. It would be far-fetched to argue that admission to a specialized agency of “Palestine,” under PLO auspices, radically changes the position of all members in the manner specified.

42 The procedural duty to attempt dispute settlement appears in Vienna Convention Arts. 65 and 66. Since the Vienna Convention would be applied only by analogy, however, its purely procedural provisions might not bind states responding to a breach by an organ of a specialized agency. Even though the law of reprisal supplies a similar procedural duty when one state contemplates a reprisal against another, in the instance addressed in this report—admission of a new member into an international organization—there will have been negotiation and de bate before a vote is ṭaken. Thus, a traditional form of dispute settlement will have transpired, in the only forum to which the aggrieved state has ready access.

The caveat is that the aggrieved state could, and perhaps should, try to persuade the appropriate organ to seek an ICJ advisory opinion on the legality of admitting “Palestine.ȝ The UN General Assembly, acting under UN Charter Article 96(2), has authorized the specialized agencies to request ICJ advisory opinions on legal questions within the scope of their activities.

47 On the question whether the United States would be an aggrieved state, the analysis would be somewhat different when it does not deal with Vienna Convention Article 60. When there is a material breach of a multilateral treaty, Vienna Convention Article 60(2)(b) and (c) would circumscribe the universe of aggrieved states. When the breach is not material, the law of reprisal recognizes, without clearly defining, some norms whose violation is erga omnes. Cf. Schachter, supra note 45, at 182-83. The violation of a norm limiting membership in an organization to “states” could be in a sense erga omnes, defining the universe of aggrieved states as all members of the organization that did not vote for admission of the nonstate.

48 The mere admission of “Palestine,” even in an organization limited to “states,” would not necessarily imply recognition of a Palestinian state under general international law. See text at note 17 supra.

50 The one context in which recognition as a state may raise an issue .under customary international law is this: “A state has an obligation not to recognize or treat as a state an entity that has attained the qualifications for statehood as a result of a threat or use of armed force in violation of the United Nations Charter.” Restatement (Third), supra note 12, §202(2). This obligation could apply also to an international organization. Although the PLO may well have used force on a number of occasions in violation of principles of peaceful dispute settlement contained in the Charter, those efforts have had limited success. Of course, it is a premise of this Comment that “Palestine” might be admitted to an international organization even though it has not attained the qualifications of a state.

55 See id. at 41–80. Dugard concludes after an examination of UN practice that “admission to the United Nations constitutes or confirms the existence of a State.” Id. at 79. See also M. Tandon, Public International Law 168 (10th ed. 1965).

56 See text at note 17 supra. This would be so, a fortiori, if the applicant need only be a “country,” or even a “sovereign country,” under the specialized agency’s constituent instrument.

58 Perhaps the closest thing to an authoritative decision on this point would be Judge Sir Gerald Fitzmaurice’s individual opinion in Certain Expenses of the United Nations, 1962 ICJ Rep. 151, 203–05 (Advisory Opinion of July 20). But he was referring to a right to withhold payment of expenses assessed in violation of the constituent instrument. That is not the case at hand.

Casalin, Deborah and Lamb, Christopher 2009. Participation of States in the International Conference of the Red Cross and Red Crescent and assemblies of other international organizations. International Review of the Red Cross, Vol. 91, Issue. 876, p. 733.
Ronen, Yaël 2011. Is There a Court for Gaza?. p. 469.
Google Scholar Citations