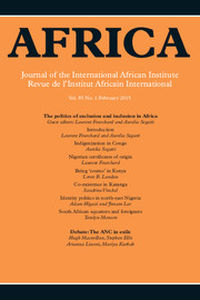 The politics of exclusion and inclusion in Africa

Debate: The ANC in exile