Home
The Writing on the Wall

The Writing on the Wall

Rethinking the International Law of Occupation 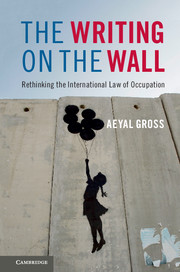 As Israel's control of the Occupied Palestinian Territory nears its fiftieth anniversary, The Writing on the Wall offers a critical perspective on the international law of occupation. Advocating a normative and functional approach to occupation and to the question of when it exists, it analyzes the application of humanitarian and human rights law, pointing to the risk of using the law of occupation in its current version to legitimize new variations of conquest and colonialism. The book points to the need for reconsidering the law of occupation in light of changing forms of control, such as those evident in Gaza. Although the Israeli occupation is a main focal point, the book broadens its compass to look at other cases, such as Iraq, Northern Cyprus, and Western Sahara, highlighting the role that international law plays in all of these cases.

'Developed in the 19th century as a temporary device to protect civilians, the law of occupation has more recently revealed a tendency to turn into a lasting instrument of disciplining populations. Under a humanitarian pretence, military rule slides into colonial sovereignty. In this insightful work Aeyal Gross discusses cases such as Iraq, Afghanistan, Tibet, and Crimea, and especially the long-standing occupation of Palestine, in order to reveal the paradoxes and hypocrisies of the law of occupation. His critique is sharp and incisive but also sympathetic and oriented from a purely conceptual to a more openly normative reading of the law. This is a wonderful reflection of the limits and possibilities of using a traditional legal concept in a changed world of complex international conflict.'

Martti Koskenniemi - author of The Gentle Civilizer of Nations: The rise and fall of international law 1870-1960

'The struggle for human rights and the enforcement of international humanitarian law must also include, this book strongly testifies, a profound mediation on the juridical, ethical and political foundation of these framework and a critical account of their limits and legitimizing effects. It is only rarely that a book with a potential to completely reframe our understanding of its subject matter emerges. This book does nothing less than reconceptualise our understanding of the legal reality of 'occupation' - with discussion primarily on the Israeli occupation of Palestine, but also on other occupations such as the American occupation of Iraq and with implications relevant to rethinking situations in many places world wide. It is at once a major intervention by one of legal studies most original scholars, and an indispensable resource for lawyers and non lawyers, accessibly written by a public intellectual whose activism always followed his scholarship.'

'On every level - theory, ethics, law, politics - The Writing on the Wall’s rethinking of the law of occupation is both urgent and long-overdue. Confronting cutting-edge debates in a wide array of fields, Gross unflinchingly develops a bold and innovative framework, which will make this book the indispensable starting-point for all future discussions.'

'The Writing on the Wall is a valuable response to growing frustration with the inadequacies of the law of occupation in redressing contemporary realities of foreign territorial control. The book, informed by Gross’ deep involvement in the international practice he documents, addresses a key question that has been posed by civil society about Israel’s occupation: has occupation law become so implicated in Israeli actions aimed at maintaining prolonged rule over Palestinian territory, that the law is now part of the problem?'

'Gross’s analysis is not merely a critique of the application (or the non-application) of international humanitarian law by Israel, [it] also aims to examine the use of these legal frameworks in the context of an ongoing occupation. By arguing for a normative and functional approach to occupation, particularly in light of changing circumstances (such as in Gaza) so as to avoid legitimizing colonialism and conquest, Gross reframes our understanding of international humanitarian law.'