Wellbeing, Recovery and Mental Health
Buy print or eBook[Opens in a new window]

Chapter 2 - The Science of Wellbeing and Positive Psychology

from Section 1 - Where Are We Now?

Responses to the question What is wellbeing? vary greatly depending on whether it is a lay person, health practitioner, person with lived experience of illness, economist, philosopher, psychologist or sociologist answering the question. Lay persons or persons unfamiliar with defining concepts or constructs commonly give examples of situations or experiences that lead to wellbeing, such as having good friends or a good job. A philosophical definition is commonly brief and coherent, but may lack the precision that a scientist is seeking. One philosophical example is the following definition: how well someone’s life is going for them (Crisp, Reference Crisp and Zalta2014).

Philosophers have been arguing over and defining wellbeing for many centuries. Economists have been doing so for over one hundred years. Psychologists and wellbeing scientists are relatively new to this arena. Although recognizing the contributions to this area from philosophers (e.g. the distinction between hedonic and eudaemonic wellbeing) and economists (e.g. the distinction between evaluative and experienced wellbeing), this chapter focuses primarily on empirical attempts to define, measure and increase wellbeing, with particular focus on positive psychology and its related interventions.

In attempting to define wellbeing it is useful to consider several questions from the outset:

Clarity regarding these six questions makes it is easier to locate one’s position within the contested space of wellbeing constructs. Table 2.1 summarizes some key examples of contemporary wellbeing constructs in wellbeing science and positive psychology. Such constructs underpin the emerging health and wellbeing outcome measurement in health and human services. In reading Table 2.1, it is useful to examine the difference between hedonic and eudaemonic assumptions in terms of defining wellbeing. Shorthand definitions often combine these two approaches in phrases such as “feeling good and functioning well” (see Huppert and So, Reference Huppert and So2013).

What Is Positive Psychology?

While the origin of the term ‘positive psychology’ can be traced back to Abraham Maslow’s 1954 book, Motivation and Personality (Maslow, Reference Maslow1970; Snyder et al., Reference Snyder, Lopez and Pedrotti2011), it was many years before positive psychology as an academic field was born: a vision that included steering psychology back toward what makes life worth living, toward courage, generosity, creativity, joy, gratitude (Csikszentmihalyi and Nakamura, Reference Csikszentmihalyi, Nakamura, Sheldon, Kashdan and Steger2011). The founders of positive psychology recognized that traditional psychology had become predominantly weakness-oriented: an approach that had succeeded in alleviating many forms of human suffering but had failed at capturing the whole human picture (Snyder et al., Reference Snyder, Lopez and Pedrotti2011). The timing was ripe to address this imbalance issue. In the months that followed, Martin Seligman became the President of the American Psychological Association (APA), enabling him to pioneer the new field of positive psychology. He identified two “neglected missions” of psychology (Seligman, Reference Seligman1998, p. 2). The first was building human strength and making people more productive. The second was the nurturing of genius, the generation of high human potential (Compton and Hoffman, 2013; Seligman, Reference Seligman1998). Seligman saw this new field as combining scientific and applied approaches. He called for a mass of research on human strength and virtue. So 1998, therefore, marked the beginning of a seismic shift in psychology (Rusk and Waters, Reference Rusk and Waters2013b) and the birth of the field of positive psychology.

In the 15 or so years since the inception of positive psychology, a number of themes have surfaced, such as altruism, accomplishment, appreciation of beauty and excellence, authenticity, best possible selves, character strengths, coaching, compassion, courage, coping, creativity, curiosity, emotional intelligence, empathy, flow, forgiveness, goal setting, gratitude, grit, happiness, hope, humour, kindness, leadership, love, meaning, meditation, mindfulness, motivation, optimism, performance, perseverance, positive emotions, positive relationships, post-traumatic growth, psychological capital, purpose, resilience, savoring, self-efficacy, self-regulation, spirituality, the good life, virtues, wisdom and zest. Many of the themes studied have their origins outside of the field of positive psychology. However, Rusk and Waters (Reference Rusk and Waters2013b) looked at the breadth of the field and found that approximately a third of the positive-psychology-related terms they studied were new to the field since 1999. Therefore, it seems that positive psychology is largely exploring existing constructs, but through a fresh lens. In addition to the breadth, they also found that the size, reach and impact of the field had grown substantially since its founding. This growth has generated new sub–fields focused on the application of the science, such as positive education (Norrish Reference Norrish2015; Norrish et al., Reference Norrish, Williams, O’Connor and Robinson2013) or positive organizational behavior and positive organizational scholarship (Wright and Quick, Reference Wright and Quick2009).

As the science disseminates, there are some issues that arise by virtue of the immaturity of the field. While the breadth of research undertaken is substantial (Rusk and Waters, Reference Rusk and Waters2013b), there is tension between the depth of research and the desire for real-world application. A number of single studies have shown promising findings, but more research that replicates them across a range of populations and contexts is required: whom do interventions work for and under what conditions (i.e. effectiveness rather than efficacy: see Hone et al., Reference Hone, Jarden and Schofield2015)? More longitudinal studies are required, too. As the field matures, longitudinal studies will be conducted. In the meantime, positive psychology researchers are reminded to adhere to rigorous scientific standards (Snyder et al., Reference Snyder, Lopez and Pedrotti2011) such as those of meta-analysis and randomized control trials (Vella-Brodrick, Reference Vella-Brodrick and Keyes2013). Paradoxically, while positive psychology offers itself as the antidote to the negativity bias of psychology as usual, it must not fall prey to focusing solely on the good in the world. Good science looks at the whole picture (Snyder et al., Reference Snyder, Lopez and Pedrotti2011). As the field works toward this, those working with the application of positive psychology must ensure that they are conscientious consumers of the science, and as such new journals focusing specifically on these issues are emerging (e.g. the International Journal of Applied Positive Psychology, which will launch in 2016). It is with this in mind that we move to the key theories and evidence.

What Are Some Key Theories within Wellbeing and Positive Psychology Research?

There is a well-established suite of theories relating to wellbeing and key areas of positive psychology. Table 2.2 provides a sample of some of the key theories, which include emotions, attentional states, cognition, motivation, goal striving and relationships.

What Is the Evidence Base?

As an example of a causal study, Lyubomirsky et al. (Reference Lyubomirsky, King and Diener2005) examined the results of experimental studies and found that increasing people’s positive emotions had the effect of making them better at conflict resolution and more social. They also found in their meta-analysis, which included longitudinal studies, that happiness does lead to better relationship and work outcomes. As examples of evidence they cited findings that increases in happiness lead to greater creativity, productivity and quality of work, and income (Estrada et al., Reference Estrada, Isen and Young1994) and to stronger social support and an increased likelihood of marriage (Harker and Keltner, Reference Harker and Keltner2001), that subjective wellbeing impacts mental and physical health (Pressman and Cohen, Reference Pressman and Cohen2005) and leads to healthier immune function (Davidson et al., Reference Davidson, Kabat-Zinn, Schumacker, Rosenkranz, Muller and Sontorelli2003), and that happier people even live longer.

Furthermore, what both this cross-sectional and causal research suggest is that positive emotions can and do have impacts beyond individuals to their close connections.

What Is the Evidence for Positive Psychology Interventions?

Sin and Lyubomirsky (Reference Sin and Lyubomirsky2009) define positive psychology interventions (PPIs) as “treatment methods or intentional activities aimed at cultivating positive feelings, positive behaviours, or positive cognitions.” Their meta-analysis found that PPIs are effective at increasing wellbeing and decreasing depression, but the effect sizes were moderate and should be treated with a level of caution. They found four factors that heighten the efficacy of PPIs: high levels of depression; increased age; individual interventions (rather than group interventions); and longer interventions. There is some debate as to whether participants should be matched to interventions based on a person–activity fit or not. For example, participant preference for undertaking a PPI has been positively related to commitment to adhere to the activity (Schueller, 2010), and matching participants to an intervention that was based on an orientation to happiness that differed from their dominant orientation was effective at enhancing wellbeing (Giannopoulos and Vella-Brodrick, Reference Giannopoulos and Vella-Brodrick2011).

However, Schueller (2011) found no significant difference between participants assigned to activities based on preference and those randomly assigned to activities. PPIs have been used in studies specifically targeting clinical participants, such as positive psychotherapy (PPT; Seligman et al., Reference Seligman, Rashid and Parks2006; see Chapter 11) and in nonclinical studies. However, regardless of the population, many study designs include pre- and post-test measures of depression and/or negative affect as well as measures of positive functioning.

Table 2.3 includes examples of the efficacy of PPIs. It should be noted that many constructs explored in PPIs have their origins outside positive psychology, such as gratitude, forgiveness and mindfulness. While positive psychology cannot lay claim to these concepts, its role does include an understanding of their function in building human strength and generating high human potential.

In this chapter we introduced key definitions relating to wellbeing and highlighted ways to approach this contested domain. After a summary of some key theories within the science of wellbeing and positive psychology, a brief overview of recent empirical evidence for positive psychology interventions (PPIs) was provided. Key debates continue about evidence from clinical compared with nonclinical populations, adding emphasis to the usefulness of cross- [?] fertilization between wellbeing research and research in mental health recovery. 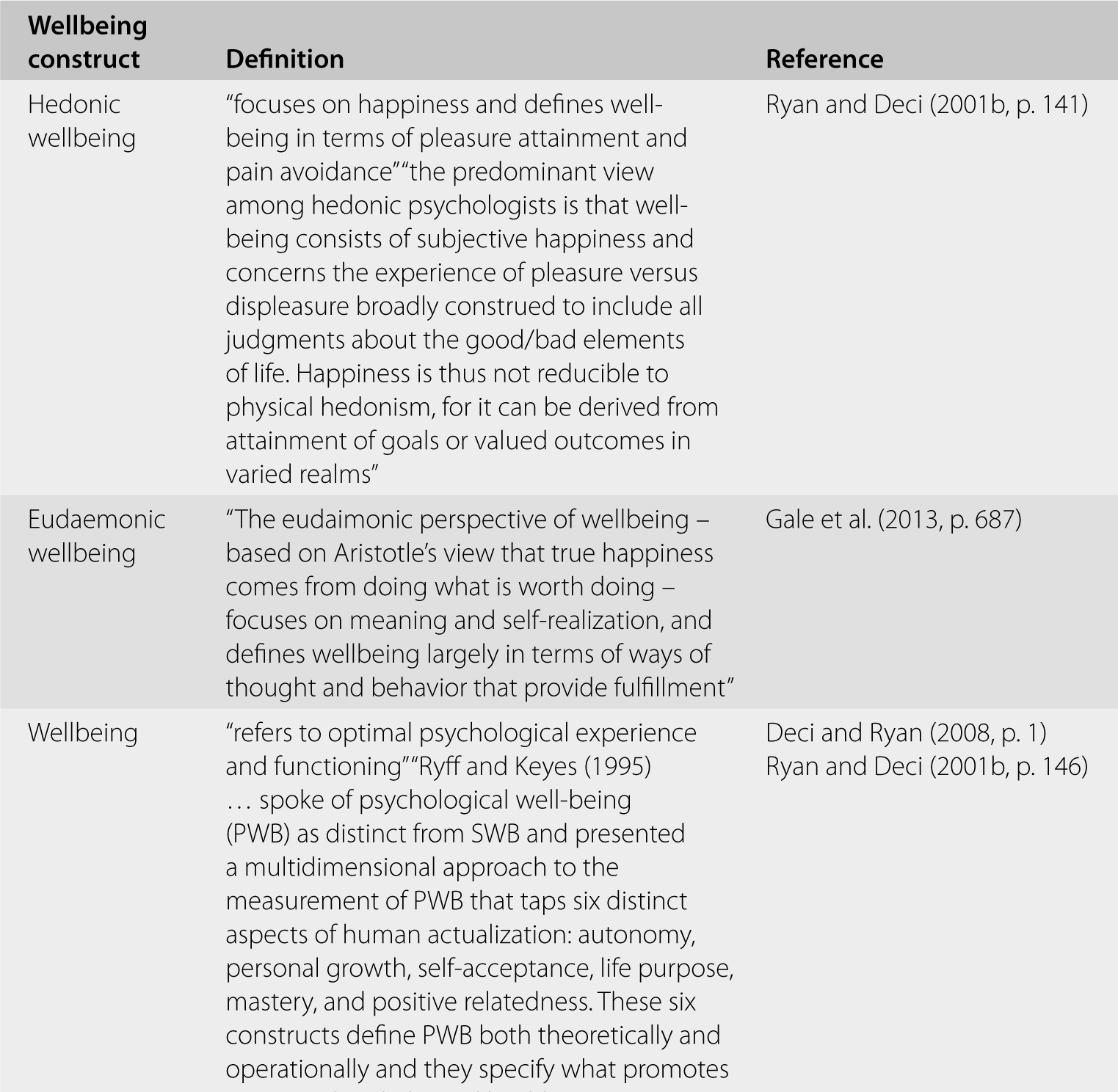 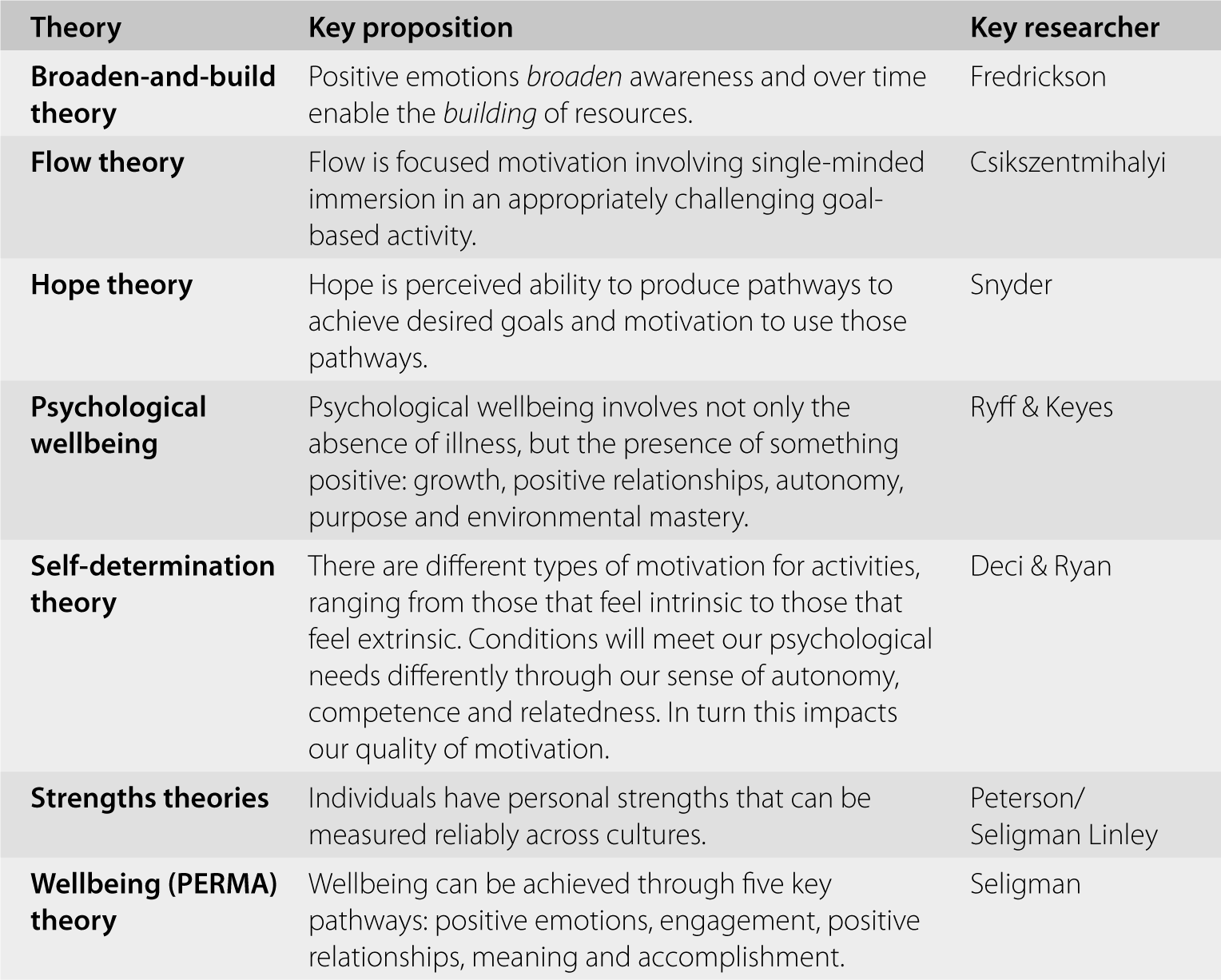 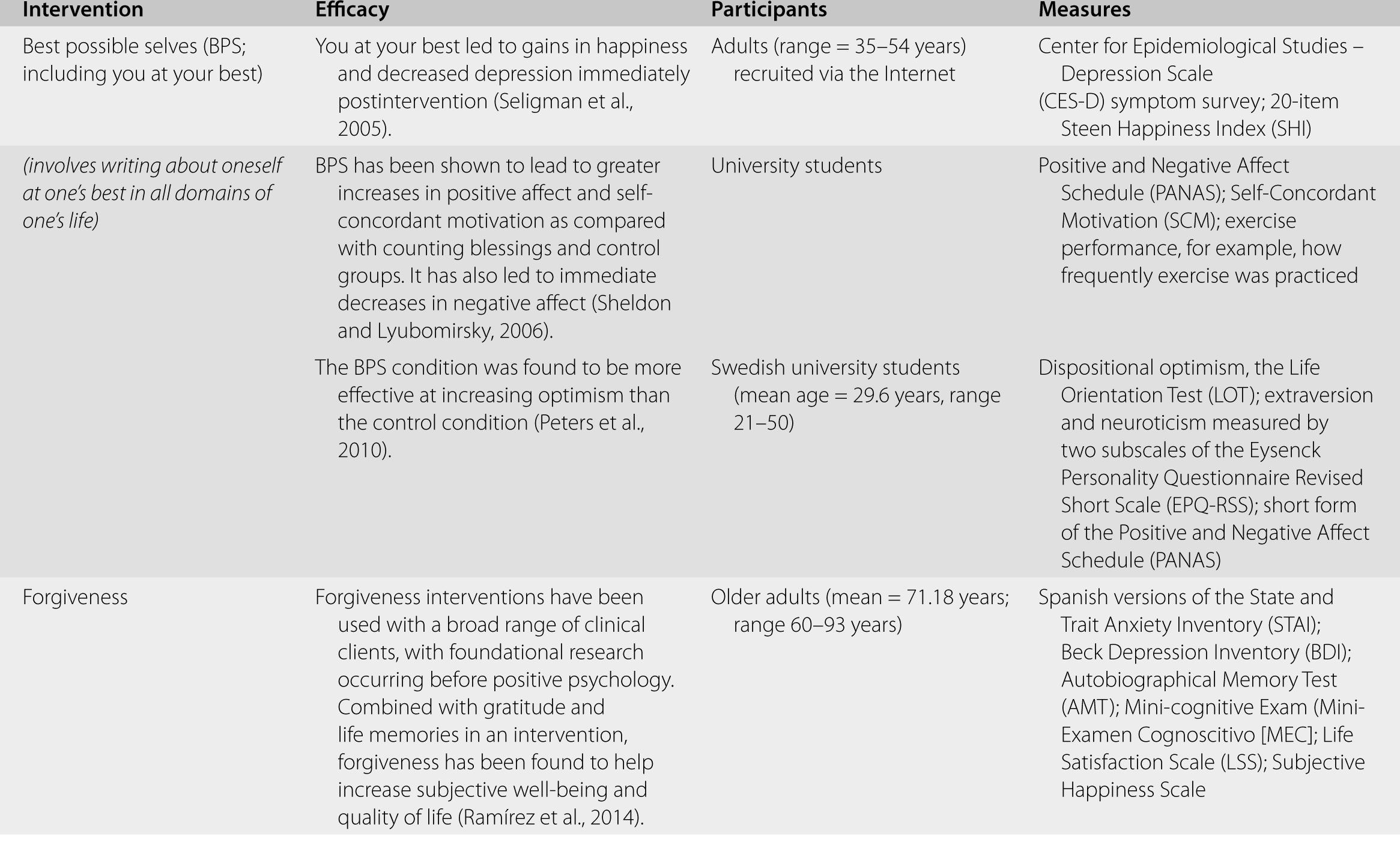