A History of the Novel as Artificial Life 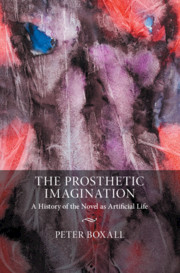 In The Prosthetic Imagination, leading critic Peter Boxall argues that we are now entering an artificial age, in which our given bodies enter into new conjunctions with our prosthetic extensions. This new age requires us to reimagine our relation to our bodies, and to our environments, and Boxall suggests that the novel as a form can guide us in this imaginative task. Across a dazzling range of prose fictions, from Thomas More's Utopia to Margaret Atwood's Oryx and Crake, Boxall shows how the novel has played a central role in forging the bodies in which we extend ourselves into the world. But if the novel has helped to give our world a human shape, it also contains forms of life that elude our existing human architectures: new amalgams of the living and the non-living that are the hidden province of the novel imagination. These latent conjunctions, Boxall argues, are preserved in the novel form, and offer us images of embodied being that can help us orient ourselves to our new prosthetic condition.

‘The Prosthetic Imagination is at once a majestic work of literary history and a formidable work of conceptual criticism. Through readings that display striking range and agility, Peter Boxall reconstructs the formal and historical development of the novel as the development of artificial life. Moving from More to Beckett, from Cervantes to Bolaño, this book delineates a remarkable genealogy for the interrelation of prosthetics and novelistic aesthetics, showing how fiction's philosophical entanglements with the body have informed its conditions of possibility.'

‘This is a dazzling study of the prosthetic imagination in prose fiction, the logic which does not refer to the world but produces it. Boxall's thesis entails an entire re-reading of the novel's history as well as the abandonment of realist criteria. Biotechnology and the idea of replacement, the 'seam' that connects imagination to its material extension, shape the novel from the start, from More to Modernism, from Cervantes to Eliot. The wonderful juxtapositions, More and Asimov, Hobbes and Timothy Clark, Goethe and Kleist, Dickens and Agambon, constantly surprise. Central to this study is a brilliant reading of the hand and its social and biological roles. Just as certainly as the prosthetic affirms the novel's artificial life, so it brings death into the fictional world.'

‘The Prosthetic Imagination is a major book: it does nothing less than to rewrite Erich Auerbach’s Mimesis as an epic struggle between consciousness that materializes as information and material that resists that transformation. By thus reframing the history of the novel in terms of the changing relation between prothesis and mimesis, this account does what none other has - which is to reveal, in an extraordinary range of novels, the dialectical potential that pushes past the juncture where thought materializes in and as the world. Boxall has convinced me that we are seeing now nothing less than a shift from material embodiment to information as the basis of 'shared being' – a shift which requires 'a different universe of thought'.’

‘In The Prosthetic Imagination Boxall … reveals his impressive breadth of acquaintance with novels, from Thomas More's Utopia (1516) to books of the 21st century.’

‘Peter Boxall’s rich and often exhilarating The Prosthetic Imagination offers an ambitious theory of the novel as well as a wide-ranging (if largely AngloAmerican) history of it, from Thomas More to Don DeLillo … a tour de force.’