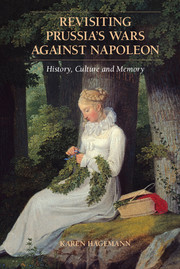 In 2013, Germany celebrated the bicentennial of the so-called Wars of Liberation (1813–15). These wars were the culmination of the Prussian struggle against Napoleon between 1806 and 1815, which occupied a key position in German national historiography and memory. Although these conflicts have been analyzed in thousands of books and articles, much of the focus has been on the military campaigns and alliances. Karen Hagemann argues that we cannot achieve a comprehensive understanding of these wars and their importance in collective memory without recognizing how the interaction of politics, culture, and gender influenced these historical events and continue to shape later recollections of them. She thus explores the highly contested discourses and symbolic practices by which individuals and groups interpreted these wars and made political claims, beginning with the period itself and ending with the centenary in 1913.

‘As one of the leading historians of gender and war, Karen Hagemann writes a masterful account of the Germanic wars against Napoleon in the era 1806–1815 and their place in subsequent collective memories. Weaving archival evidence on daily life experiences with interpretive sophistication of cultural artifacts, she assesses the place of the Napoleonic wars in the construction of Prussian-German nationalism and gendered citizenship. [This book] … will enthrall all readers interested in the play of history and memory in one of Europe’s most consequential nation-states.’

‘Karen Hagemann has written a pathbreaking book that reveals, in lusciously rich detail, how the Germans of the ‘long nineteenth century’ understood and interpreted Prussia’s wars against Napoleon. Applying methods drawn from military history, memory studies, gender studies, art history, and much else, this is interdisciplinary scholarship at its best.’

“War is the mere continuation of politics …’, Clausewitz asserted, distilling the experience of the Napoleonic Wars. He passed over the fact that in Prussia, as in all of the German lands, politics was a battlefield of contending interests, norms, and values as well as of competing political projects. This latter conflict over competing war cultures and war is the subject of the present book. The divisiveness of war cultures arose amid a novel configuration of war, in which the full force of public opinion underwrote the efforts to mobilize a people only to be confronted with fatal choices. Was the war against Napoleon to be a ‘War of Liberty’ or a ‘War of Liberation’? Karen Hagemann concludes that it was waged by contemporaries for the liberty of the German nation, but won by historians and novelists for Prussia’s liberation. Of course, it was a mere paper victory, but the price was paid in blood.’

'Hagemann is a leading authority on the Napoleonic Wars in Germany, and this volume represents a capstone of her research over the past two decades. In effect, this is two books in one. The first half is a vivid account of Prussia's defeat in 1806 and the mobilization against Napoleon from 1813–15. The author studies songs, sermons, and ceremonies to show how German nationalist intellectuals and Prussian civil servants prepared society for war. Sophisticated gender analysis sets this account apart from Christopher Clark’s Iron Kingdom. The second half is billed as a study of memory, yet its main emphasis is print culture - novels, memoirs, and historical works. Hagemann presents an ambitious quantitative analysis of authors (class, gender, profession, region) and the book market (publishers, booksellers, degrees of censorship). Summing up: recommended. Graduate students and faculty.'

'Hagemann’s detailed research presented in this book is therefore important for anyone interested in this formative period in Prussian and German history.'

'Hagemann thus has created nothing less than a full-blown analysis of the rise of the German nation - and the idea of that nation - over the course of a century. Her vision is inherently political, but political in a manner that contrasts with what we traditionally consider political history. … Revisiting Prussia's Wars against Napoleon presents a new analysis of nineteenth-century history, advances a manifesto and program for memory studies, and subtly critiques current historiographical trends. Hagemann has crafted a nuanced, judicious, and convincing picture of Prussian history that makes a substantial contribution to what one might call the ‘new Prussian history’ as represented by those who have criticized the Sonderweg thesis, by Clark in his Iron Kingdom, and by William Hagen in his equally brilliant Ordinary Prussians: Brandenburg Junkers and Villagers, 1500–1840 (2007).'