Qing Travelers to the Far West

Diplomacy and the Information Order in Late Imperial China 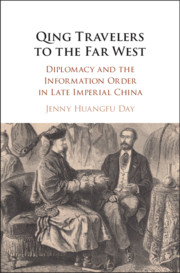 Prior to the nineteenth century, the West occupied an anomalous space in the Chinese imagination, populated by untamable barbarians and unearthly immortals. First-hand accounts and correspondence from Qing envoys and diplomats to Europe unraveled that perception. In this path-breaking study, Jenny Huangfu Day interweaves the history of Qing legation-building with the personal stories of China's first official travelers, envoys and diplomats to Europe. She explores how diplomat-travelers navigated the conceptual and physical space of a land virtually unmapped in the Chinese intellectual tradition and created a new information order. This study reveals the fluidity, heterogeneity, and ambivalence of their experience, and the layers of tension between thinking, writing, and publishing about the West. By integrating diplomatic and intellectual history with literary analysis and communication studies, Day offers a fundamentally new interpretation of the Qing's engagement with the West.

‘In this deeply informed and closely argued book, Jenny Huangfu Day rewrites the history of Chinese diplomatic interaction with the West in the late Qing. Since there was no single China or fixed, internally consistent West, Chinese diplomat-travelers found, not surprisingly, that the West they discovered and wrote about closely mirrored the divergent views they themselves represented.'

‘In Day's rich and readable account, nineteenth-century Chinese intellectuals are no longer one-dimensional monitors of Western wonders, but complex and fully human individuals articulating nuanced understanding of their tradition and the world around them. Her work is certain to change pedagogical practice, and received understanding of nineteenth century Chinese intellectual history.'

‘This important study offers a tantalizing glimpse of ‘the West' seen through the eyes of the Qing dynasty's earliest diplomatic representatives to Europe. Day meticulously reconstructs the rich cognitive universe of these figures and demonstrates that the very act of perceiving ‘the other' changed with the emergence of a new information order after 1860.'

'Elegant both in organization and prose … demonstrates that the diplomatic endeavors of the Zongli yamen prompted seismic shifts in thinking about places known and unknown.'

‘Day’s careful mining of archives, telegrams, personal correspondence, and newspapers, combined with her nuanced reading of envoy journals, political essays, travel writing, and poetry, offers many critical and original insights into the complex history of the emergence of a professional diplomatic corps and a new information order.’

'Day conveys the close observations of Europe and America … with excellent color and immediacy.'