The Evidence of the Printed Choirbooks 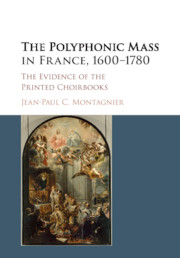 This is the first ever book-length study of the a cappella masses which appeared in France in choirbook layout during the baroque era. Though the musical settings of the Ordinarium missæ and of the Missa pro defunctis have been the subject of countless studies, the stylistic evolution of the polyphonic masses composed in France during the seventeenth and eighteenth centuries has been neglected owing to the labor involved in creating scores from the surviving individual parts. Jean-Paul C. Montagnier has examined closely the printed, engraved and stenciled choirbooks containing this repertoire, and his book focuses mainly on the music as it stands in them. After tracing the choirbooks' publishing history, the author places these mass settings in their social, liturgical and musical context. He shows that their style did not all adhere strictly to the stile antico, but could also employ the most up-to-date musical language of the period.

'… Montagnier’s book is a seminal and exceptional contribution to the study of French sacred music during the seventeenth and eighteenth centuries.'

'Until the appearance of this book, no comprehensive study of the development of the polyphonic mass in France, from the early seventeenth century up to the eve of revolution, had been undertaken. For that reason alone, it should be lauded as an exceptional contribution to the literature … a monumental achievement … this book will undoubtedly prompt many further enquiries.'

'Montagnier’s book stands as a welcome and authoritative contribution to the literature.'

'Jean-Paul Montagnier's book is a much-needed addition to the current literature on French seventeenth- and eighteenth-century music … a rich resource for anyone interested in Baroque music.'

‘[Montagnier's] control of such a large information is impressive, and the combination of broad context and specific detail ensures that the content is accessible even to the reader with little prior specialist knowledge … a hugely important addition to the literature on French Baroque sacred music.’

‘… the present book by Jean-Paul C. Montagnier, the first devoted to a cappella Masses published in France in this period, is welcome not only in terms of the new factual information it imparts, but also because it invites a much-needed reassessment of the repertoire discussed … the potential of this book to act as a springboard for others to investigate this repertory further makes it a hugely important addition to the literature on French Baroque sacred music.’