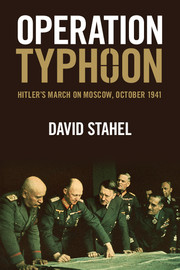 In October 1941 Hitler launched Operation Typhoon the German drive to capture Moscow and knock the Soviet Union out of the war. As the last chance to escape the dire implications of a winter campaign, Hitler directed seventy-five German divisions, almost two million men and three of Germany's four panzer groups into the offensive, resulting in huge victories at Viaz'ma and Briansk - among the biggest battles of the Second World War. David Stahel's groundbreaking new account of Operation Typhoon captures the perspectives of both the German high command and individual soldiers, revealing that despite success on the battlefield the wider German war effort was in far greater trouble than is often acknowledged. Germany's hopes of final victory depended on the success of the October offensive but the autumn conditions and the stubborn resistance of the Red Army ensured that the capture of Moscow was anything but certain.

‘With a firm grasp of strategic, operational, economic, and logistical factors, Stahel has again laid bare German weaknesses and shattered the myth of the all-powerful Wehrmacht. The best sort of revisionism, Operation Typhoon dissects the material factors leading to ultimate German failure before Moscow, all the while integrating the personal aspect of the battle through deft use of the diaries and letters of German soldiers. An impressive achievement.'

Stephen G. Fritz - author of Ostkrieg: Hitler's War of Extermination in the East

‘David Stahel has written a detailed, carefully documented, and engaging analysis of the last great German offensive of 1941. All the elements of the German defeat are here, from macroeconomics, ideology, and criminality to logistics, intelligence, tactics, and weapons design. This is a fine complement to Stahel's works on Barbarossa and Kiev.'

Geoffrey P. Megargee - author of War of Annihilation: Combat and Genocide on the Eastern Front, 1941

‘Stahel's third book on Germany's 1941 Russian campaign demonstrates that focus on the operational level led to ignoring strategic considerations. Emphasis on force of will encouraged overlooking material problems. Defeat in front of Moscow was a consequence not of Hitler's interference, not even of Soviet resistance, but of the vaunted German army's internal weaknesses.'

‘David Stahel's new book on Operation Typhoon is his best yet. Wedding detailed archival research, an intimate knowledge of the secondary sources, and a gripping narrative, Stahel has set a new standard for scholarship on the Eastern Front. No student of the massive conflict between Nazi Germany and the Soviet Union should be without this book. A major addition to the literature.'

Robert M. Citino - author of Death of the Wehrmacht: The German Campaigns of 1942

'[David Stahel] combines strategic and economic context, statistics, operational analysis, and tactical-level accounts from individual soldiers in constructing a layered but highly readable narrative. It is a remarkable feat.'

'Stahel, as he has done with his previous two books, has fundamentally and correctly reinterpreted the latter stages of the Barbarossa campaign. It is a must read for general and military historians.'

'… a treasure trove of information regarding the late fall battles between the Germans and Soviets in 1941.'

'Stahel incorporates in quantity the voices of German soldiers and outside observers.'