Home
Lengthening the Arm of the Law

Lengthening the Arm of the Law 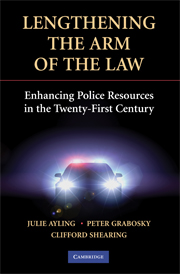 Relentless fiscal pressures faced by the public police over the last few decades have meant that police organisations have had to find new ways to obtain and harness the resources needed to achieve their goals. Through entering into relationships of coercion, commercial exchange, and gift with a wide variety of external institutions and individuals operating in both public and private capacities, police organisations have risen to this challenge. Indeed, police organisations are increasingly operating within a business paradigm. But what are the benefits of these relationships and the nature of the risks that might accompany reliance upon them? This book examines these new modes of exchange between police and 'outsiders' and explores how far these relationships can be taken before certain fundamental values - equity in the distribution of policing, cost-effectiveness in the delivery of police services, and the legitimacy of the police institution itself - are placed in jeopardy.

'… (to return to the main thrust of the book) there are risks to reputation if everything is for sale. What are the police for? … who are they serving? As the authors say, police constantly have to make choices, because they do not have the resources to do everything the public feel the police ought to do.'