Home
The Language of Nazi Genocide

The Language of Nazi Genocide

Linguistic Violence and the Struggle of Germans of Jewish Ancestry 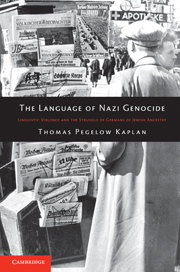 In the Nazi genocide of European Jews, words preceded, accompanied, and made mass murder possible. Using a multilayered approach to connect official language to everyday life, historian Thomas Pegelow Kaplan analyzes the role of language in genocide. This study seeks to comprehend how the perpetrators constructed difference, race, and their perceived enemies; how Nazi agencies communicated to the public through the nation's press; and how Germans of Jewish ancestry received, contested, and struggled for survival and self against remarkable odds. The Language of Nazi Genocide covers the historical periods of the late Weimar Republic, the Nazi regime, and early postwar Germany. However, by addressing the architecture of conceptual separation between groups and the means by which social aggression is disseminated, this study offers a model for comparative studies of linguistic violence, hate speech, and genocide in the modern world.

‘A sensitive, sophisticated, and rigorous analysis of the linguistic violence that accompanied and enabled the Shoah. Pegelow Kaplan uses a vast and diverse array of sources, from press directives to newspapers, diaries, and interviews with survivors, to reveal how, between 1928 and 1948, laws, institutions, and individuals interacted to produce and sometimes contest the Nazi categories of ‘German' and ‘Jew'. In the process, he speaks in profound and compelling ways to key questions in the study of the Holocaust, about continuity, antisemitism, ‘ordinary Germans' and Jewish resistance. Especially valuable is Pegelow Kaplan's consideration of all Germans of Jewish ancestry and his keen ear for the desperation and ingenuity with which people defined as outsiders and targeted for destruction struggled, using everything they had to save their families, their lives, and their selves.'

‘Words can and do kill where messages of hatred become transformed into murderous action. Thomas Pegelow Kaplan's excellent study explores the importance of language for the persecution of Jews during and immediately after the Nazi era without ignoring the reaction of those stigmatized by the rhetoric of racism. This book is crucial for the understanding of the Holocaust and other genocides.'

Jürgen Matthäus - Contributor to Christopher Browning's The Origins of the Final Solution: The Evolution of Nazi Jewish Policy, 1939–1942

‘In this methodologically innovative and impressively researched book, Thomas Pegelow Kaplan elevates the study of the Nazi regime's manipulation of language to a new level of sophistication and nuance. The book shows how Nazi racial terminology permeated everyday life, not only facilitating the legal and social exclusion of Jews, but also undergirding the violence, and ultimately the genocide, that was perpetrated on them. A great strength of the book is that it couples a detailed analysis of the mechanisms by which the Nazi regime produced racist language with a compelling explanation of how German Jews attempted to cope with, and sometimes resist, the constant linguistic assaults on their Germanness, their dignity, and their humanity.'

‘Pegelow Kaplan's mastery of primary and secondary sources is exemplary and his lexometric analysis breaks new ground … this book takes the study of public discourse and successfully shows both its debasement of language and insidious role in forwarding the Nazi's genocidal agenda.'

'In a multi-layered analysis, Thomas Pegelow Kaplan attempts to comprehend how the Nazis categorized their racial enemies in the press and how Germans of Jewish ancestry contested and struggled for survival in the midst of this propaganda onslaught … [he] deserves credit for explaining how hatred of the Jews became part of the everyday language of stories and editorial comment in the press.'