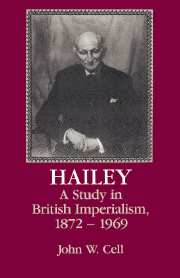 William Malcolm Hailey (1872–1969) was, by common consent, the most distinguished member of the Indian Civil Service in the twentieth century. Going out to India in 1894, he served as the first chief commissioner of Delhi (1912–18), as Finance and then Home Member of the Viceroy's Council (1919–24), and then as Governor of the Punjab (1924–8) and the United Provinces (1928–34). As adviser to five viceroys, he was one of the most resourceful strategists seeking to deal with the challenge of Gandhi and the Indian National Congress. After leaving India he had what amounted to a second career in relation to Africa, during which he directed two editions of the African Survey (1938, 1956), wrote two important reports on British colonial administration, and served as an adviser to the Colonial Office. This is the first book-length study of Hailey's career.

"Although the text is densely packed with detail, Cell keeps the major themes well in view and provides a pungent, often critical, though never unsympathetic commentary about Hailey's activies and style." Canadian Journal of History

"...meticulous and informative biography....illuminate[s] the crumbling of Victorian certainties in the face of the new world of Asian and African resurgence." C. A. Bayly, Times Literary Supplement

"Certainly Cell's conclusion is justified: that Hailey was a distinguished servant of empire, well deserving of this fully documented, thorough study, as valuable as it is readable. It will be of interest to Indianists and Africanists alike." Briton C. Busch, American Historical Review

"This important book is of particular importance for the specialist, whether of the British Empire, India, or Africa, but it is also of interest to the general reader who wants to see how the empire worked from the perspective of one of its most distinguished operatives, a man who was at the center of the British attempt to deal with the rise of nationalist movements both in India and in Africa." History

"William Malcolm Hailey, from 1936 Lord Hailey, has long needed a biographer, for msot surveys of British imperial history invoke him, citing his profound influence on the development of colonial policy, his two careers--in India and in Africa--and, in particular, his magisterial African Survey, published in two different editions in 1938 and 1956. In John W. Cell, Lord Hailey has found not only his biographer, but a scholar able to deconstruct his career and reveal it in its true dimensions, so that virtually every judgment in the sentence above stands revealed as ill-conceived." Robin W. Winks, Albion

"John Cell has pored long and with admirable results over the vast accumulation of documents from which the civil servant must be reconstructed. In fact, he makes a model contribution to the genre of administrative history with his detailed and coherent rendering of an eminent official life." Robin J. Moore, The International History Review

"...the book's focus on the life of one influential individual over a span of some three-quarters of a century gives us an intimate view of the British Empire not to be found in the standard studies of imperial policymaking at the top. For political scientists and historians alike, this book illuminates imperial politics in the days of Britain's decline in a fresh and informed manner." Journal of Interdisciplinary History

"...the definitive study of Lord Hailey. The author, a specialist in British colonial administrative history, canvassed a vast range of unpublished documents in Indian, British, and American archives, as well as printed materials needing eleven pages to list. The Cambridge University Press produced, as usual, a meticulously edited an handsome book." Don M. Creigier, Canadian Review of Studies in Nationalism