Time to Repair in Senegal 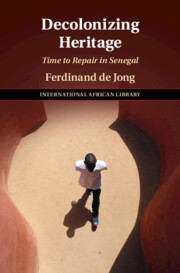 Senegal features prominently on the UNESCO World Heritage List. As many of its cultural heritage sites are remnants of the French empire, how does an independent nation care for the heritage of colonialism? How does it reinterpret slave barracks, colonial museums, and monuments to empire to imagine its own national future? This book examines Senegal's decolonization of its cultural heritage. Revealing how Léopold Sédar Senghor's philosophy of Négritude inflects the interpretation of its colonial heritage, Ferdinand de Jong demonstrates how Senegal's reinterpretation of heritage sites enables it to overcome the legacies of the slave trade, colonialism, and empire. Remembering and reclaiming a Pan-African future, De Jong shows how World Heritage sites are conceived as the archive of an Afrotopia to come, and, in a move towards decolonization, how they repair colonial time.

'This is a timely and fascinating book. De Jong understands the political urgency of connecting the contemporary debates around persistent racism and decolonisation represented by the Black Lives Matter and Rhodes Must Fall movements with a deep historical understanding of the nuances of how these same debates have resurfaced in Senegal. Through a meticulous analysis of the complex allegiances, identifications and resistances to French colonialism, De Jong tracks the re-emergence of forms of Négritude and Pan-Africanism in contemporary heritage developments in Senegal while arguing convincingly, that museums and memorial sites are a form of repair against the damage engendered through the trauma of colonialism.'

'Decolonizing Heritage opens us to a clear understanding of our time when statues are falling under the force of decolonization. This attentive, well informed, and enlightening reading of the postcolonial realities of Senegal is, more generally, a powerful demonstration that to reclaim one's heritage is to forge one's future.'

‘A fascinating and detailed account of how one nation has navigated its colonial past and how the materiality of heritage might offer new possibilities to reclaim and repair human dignity. A timely intervention into intellectual and political life in Senegal, interwoven with sites and stories that reflect broader regional histories and international initiatives, from the Pan African project to UNESCO's World Heritage List. De Jong makes an important contribution to our most pressing discussions about race, slavery, monuments, and memory.’

‘What is the legacy of a bygone decolonial vision revived in the present? De Jong’s timely and perceptive analysis of the notion of heritage and the politics of time in Senegal addresses this question. A must-read for anyone interested in the aesthetics of contemporary African politics.’

'Decolonizing Heritage: Time to Repair in Senegal is a canny foray into the culture politics of the young nation of Senegal struggling to renew and maintain its implicated but sovereign presence in the world. De Jong cleverly weaves a Senegalese story of repair of the injustices of slavery and colonization at the intersection of global ideologies and local praxis, all neatly imbricated in ruinations and monuments where is staged the future of Negritude and pan Africanism.'

‘In this powerful and innovative contribution to the scholarship on heritage and memory in Africa, De Jong reveals the multiple temporalities embedded in Senegalese heritage sites and practices. By unearthing pasts, futures and past futures, he traces histories of decolonization in heritage while resisting easy answers about what colonial legacies or post-colonial politics entail.’