Home
Congress and Policy Making in the 21st Century 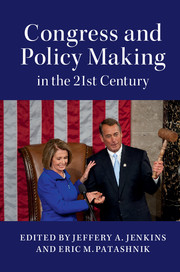 Congress is frequently said to be 'broken', 'dysfunctional', and 'weak', but how does the contemporary Congress really work? Does Congress have the capacity to solve major policy problems? Can it check an aggrandizing executive, oversee a powerful Federal Reserve, and represent the American people? Can Congress cope with vast changes in the American political economy, including rising income inequality? Congress and Policy Making in the 21st Century takes a fresh look at the performance of Congress in the domestic arena, focusing on issues such as immigration, health care, and the repeal of 'Don't Ask, Don't Tell'. With original contributions from leading scholars, this important volume examines how Congress tackles - and fails to tackle - key policy challenges in an era of growing social diversity and ideological polarization. Rich in analysis and illuminating detail, the book reveals the full complexity of the institution at work.

'[These] essays provide two essential contributions - an emphasis on the contemporary Congress and a focus on the part it plays in policy making. They break away from dated understandings, and they push the reader to imagine the products of the legislative process, not just the process alone.'

'How well does Congress address today’s enormous social, economic, and fiscal challenges? Do our classic theories of Congressional behavior and operations still hold up? Patashnik and Jenkins brilliantly assemble the leading Congressional and Public Policy scholars for a wonderfully insightful, coherent, and relevant collection of analyses. I learned so much, and I can’t wait to share with my students the fresh inquiries and topical case studies. A new classic is born.'

'Most scholarship on Congress focuses on internal institutions and procedures, rather than on policy making. This volume weighs in to right that imbalance … With so much variation across issues, the book offers a more complete portrait that goes beyond easy cynicism or blanket denunciations of congressional ‘dysfunction'.'

'To explain when [Congress] does - or doesn't - work, we need new theories and explanations, ones that situate Congress within the current political context. This [volume] … demonstrat[es] that in order to understand the twenty-first-century Congress and its role in the policy process, we need to first recognize that it operates in a changed political landscape, one featuring strong presidents, polarized parties, and declining public trust.'

'… these essays transcend assessments of institutional performance based on the number of laws passed and instead evaluate the extent to which legislators produce policies that address major domestic priorities. An analytically astute and deeply sobering account of why a nation that excels in so many other respects today struggles to govern itself.'