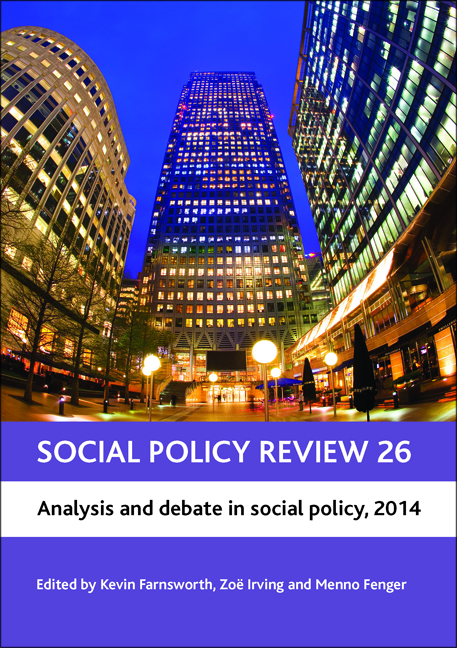 Part One: The British welfare state

This first part of Social Policy Review traditionally examines annual transformation in British social policy, usually focused on the ‘five giants’. This year the approach is slightly different. Each of the chapters presented in this part focuses on broader themes, many of which tend to be neglected in social policy analysis.

In Chapter One, Tracey Warren focuses on the changing nature of the work–life balance in the light of the economic crisis. While much of the focus of social policy analysis in the past has been on the impact on family life of ever-longer working hours (for those in work), Warren argues that we need to consider also the impact of the post-2008 economic crisis on work-time underemployment and on economic security. Most importantly, she offers insights into the class dimensions of the work–life balance debate, arguing that there is a clear difference between how the middle and working classes experience and manage the work life in the UK.

Liam Foster, in Chapter Two, examines the changing nature of pensions policy in the UK with a particular focus on the gendered dimensions of retirement incomes. Here the focus is on the implications of the Coalition government's policies on pensioners, and especially on women, with a particular focus on changes to private as well as public pensions, and both in the short and longer terms. Foster considers whether, set against rising life expectancies, retirement futures are likely to be more or less stable, equitable and well funded. On each of these questions, the Coalition government's policies are found wanting.

In Chapter Three, Ross Fergusson takes a critical look at the impact of government policy on young people – namely, school leavers. Fergusson’s chapter is an engaging and enlightening examination of this relatively under-researched area in social policy. He presents the issues of school leaving age and training for young people in an interesting historical and political economy framework which allows us to see the key links between the economy, social instability and social control and the school leaving age. As he also makes clear, the politics of the school leaving age are also complex and surprising.