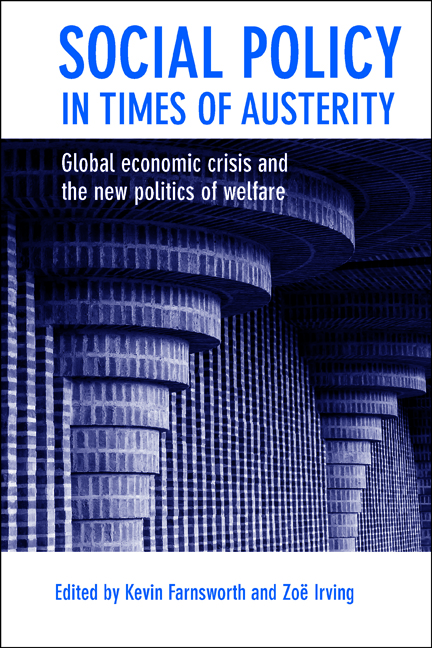 one - Austerity: more than the sum of its parts

Austerity defines the shape, conditions and ambitions of the post-2008 welfare state. But despite its currency within social policy debate, ‘austerity’ itself remains under-scrutinised and under-theorised. We argue here that austerity is about more than spending cuts and deficit reduction. It concerns the transformation of welfare states in the face of structural economic weakness and antithetical politics that exist within, but also go beyond, nation states. It is about the unwillingness or inability of citizens and policy makers to defend the welfare state in the face of ongoing economic, political and social crises. It is also about the underlying structural weaknesses of contemporary capitalist economies, the delegitimisation of government, the ineffectiveness of governance and the fact that successive welfare state reforms have both steered social policies in less progressive directions and have rendered social policy less, rather than more, compatible with post-crisis economies. The precise impact on developed welfare states is, as we have argued previously (Farnsworth and Irving, 2011, 2012), uneven and variable, but most are encountering austerity in one form or another and many of those that have not so far imposed deep expenditure cuts plan to do so over the next decade. Some welfare states are simply being retrenched, others are undergoing a process of restructuring, and still others are experiencing wholesale reconfiguration. However austerity is manifested, the prognosis for welfare states is not good.

Contrast this with the early post-financial crisis period: initial indications were that a progressive politics of welfare expansion could emerge. The financial crisis, unprecedented in terms of its depth and international reach, exposed the inadequacies of the prevailing neoliberal experiment and held the promise of a Keynesian revival. UK Prime Minister Gordon Brown, speaking after a world summit on the crisis in 2009, pronounced the old Washington Consensus ‘dead’, and, although unspecific about what had been put in its place, it seemed clear that the recovery would be state led and state funded. But this revival of the state was short-lived. The rhetoric may have changed, but five years on the strange non-death of neoliberalism described by Colin Crouch (2011) is a clear reality – the anticipated demise deflected through the dissociation of politics and economics in a new ‘age of austerity’.