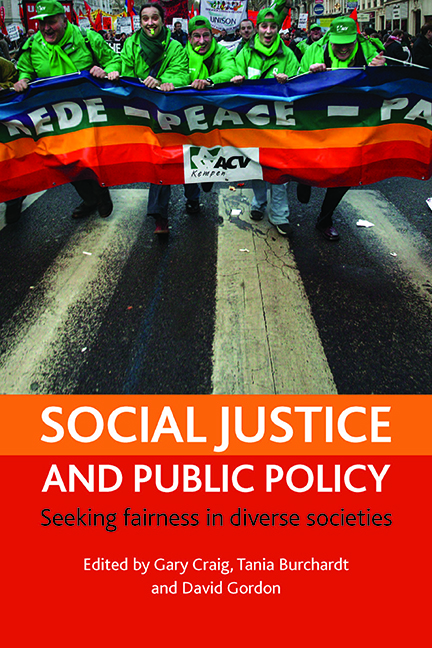 Everybody is in favour of social justice, almost by definition. But what they mean by social justice, the priority they accord to it relative to other objectives, and the public policies they believe follow from it, vary widely. In the UK in 2007, for example, the recommendations of the right-wing Conservative Party's Social Justice Policy Group, chaired by ex-leader Iain Duncan-Smith, while attempting to distance itself from laissez-faire approaches, nevertheless focused on reinforcing the ‘welfare society’ rather than the welfare state. Tackling ‘an underclass, where life is characterised by dependency, addiction, debt and family breakdown’ (SJPG, 2007, p 5), was to be achieved largely by means of charitable and family help, including support specifically for the institution of marriage, because, ‘Government action […] can often exacerbate existing problems or create new ones’ (p 4). The approach was described as based on the belief that ‘people must take responsibility for their own choices but that government has a responsibility to help people make the right choices’ (p 7). Just over a decade previously, the Labour Party's Commission on Social Justice (CSJ), instigated by its then-leader John Smith, came to radically different conclusions (CSJ, 1994). For that Commission, social justice meant the:

A number of key differences are apparent. The CSJ approach is based on rights, rather than charity, on society as whole, rather than on an underclass, and the recommendations identify government action as central to tackling structural inequalities. Of the several options examined by the Commission, its preferred approach was described as ‘Investor's Britain’.

In office, (New) Labour's approach has been somewhat different from that propounded by the CSJ. Although some elements of Investor's Britain have been apparent, for example in the emphasis given to education, other policy initiatives appear to have been based on quite different conceptions of social justice. The Social Exclusion Unit, established almost immediately by Tony Blair on election in 1997, initially tackled street homelessness, teenage pregnancy and pupils excluded from school – rather closer to the Conservative's notion of an underclass than to the CSJ's emphasis on the equal right of all to meet their basic needs.