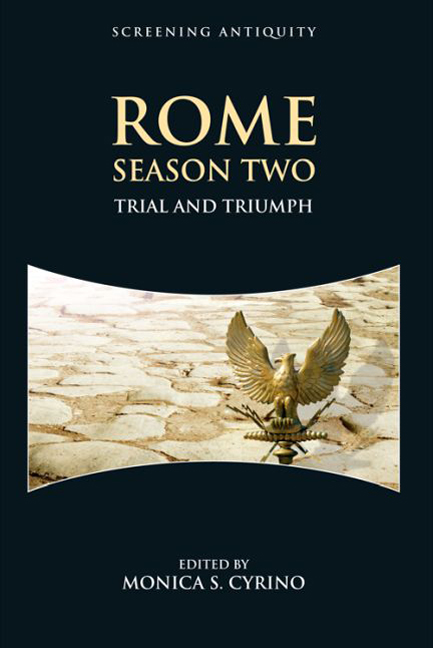 4 - Class, Chaos, and Control in Rome

from PART I - POWER AND POLITICS

Margaret M. Toscano
Affiliation:
Associate Professor of Classics and Comparative Literary and Cultural Studies at the University of Utah, USA.

The tension and interplay between social classes was a major appeal of the first season of the series Rome. By juxtaposing the stories of the fictional lower-class characters Pullo and Vorenus with that of historical aristocrats, such as Caesar, Octavian, and Antony, Rome's filmmakers show both the complexity of life in the ancient city and the difficulty of wielding power and getting and maintaining control. The comparison and contrast between the plebs and aristocrats continues in the second season of Rome, as does the desire for power and revenge in each segment of society. But another factor enters the picture that changes the relationships among the characters and classes: the extreme chaos of civil war. It is true that the civil war between Julius Caesar and Pompey Magnus disrupts the lives of all Romans in the first season. However, the strong hand of Caesar keeps the capital from disintegrating into complete lawlessness. At the beginning of the second season, however, neither the soldier Antony, nor the senatorial conspirators, nor the young Octavian has sufficient support, resources, or leadership to keep the Republic intact. The situation on the Aventine mirrors the problems among the upper-class people. Without a strong leader to keep order in the city's commercial districts, anarchy reigns among the lower classes; thugs and gangsters terrorize the neighborhoods, making normal, everyday life almost unbearable.

This chapter focuses on two relationships between a plebeian and an aristocrat that epitomize the importance of allegiances across class boundaries in Rome: the relationship between Titus Pullo and Octavian Caesar, and that between Lucius Vorenus and Mark Antony. At first glance this appears to be an odd pairing because Antony and Pullo seem more alike, as do Octavian and Vorenus. The first two are both soldiers given to excess with women, drinking, and gambling; while Octavian and Vorenus are both stoical by nature, dedicated to traditional republican values and prone to acting on their principles more than their emotions. The fact that Vorenus ends up serving Antony while Pullo remains Octavian's man is more a matter of circumstance than political or personal leaning. However, in the end it is the commonalities between Pullo and Octavian that enable them to survive, just as it is the commonalities between Vorenus and Antony that doom them to their tragic deaths.