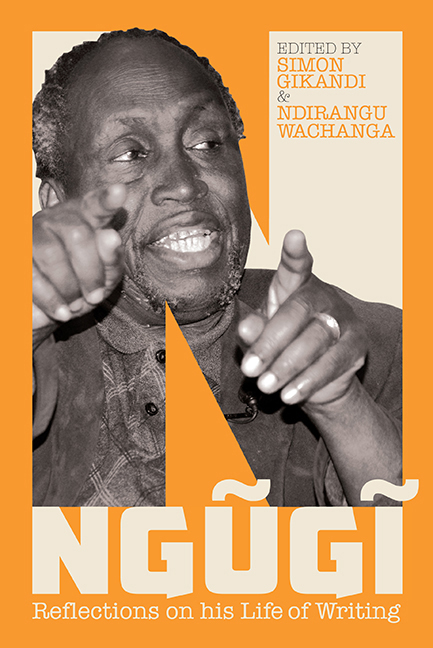 Ngugi
Reflections on his Life of Writing

This started as a work of commemoration and celebration. The two of us had been working on Ngũgĩ's works for many years from different directions— Simon Gikandi as a literary critic and historian; Ndirangu Wachanga as a journalist and documentarist. In the course of our lives and work, we had had many encounters with Ngũgĩ and knew him well in different contexts. On January 5, 2018, the author, one of the most eminent writers to have come out of Africa in the modern period, would be celebrating his 80th birthday. We thought it would be a good occasion to reflect on Ngũgĩ's life in writing, and to think through his work from the perspective of those who had known him either personally or through reading and commenting on his texts. Our goal was to put together a collection of short essays, poems, and stories that reflect on the life of the writer, his world, and his works. We were particularly interested in imaginative pieces that would reveal the different, and sometimes complex, layers that had gone into the making of the writer; and we wanted to go beyond his well-established institutional image and to probe how what might initially have appeared to be minor episodes in his life provided vistas into his coming into being as a writer, as an intellectual of decolonization, and a major figure in conversations about human rights and justice in the long twentieth century and the beginning of the twenty-first century. We were also interested in Ngũgĩ's role outside the academy in the world of education, the mass media, community theater, and activism, places where we had encountered him many times. The works collected here are reflections of this desire to celebrate the writer in his prime.

The story of Ngũgĩ's life and its intersection between his experiences and education is well known. His interviews over the years, and his memoirs in late career, have given us a complex image of the writer in his various iterations; but what we see in this collection is both an extension and complication of this well-established narrative. Ngũgĩ means different things to different people, but one of the themes running through the collection is how he is both rooted in a very specific Gĩkũyũ and Kenyan realm from which he has spread his wings to the world.