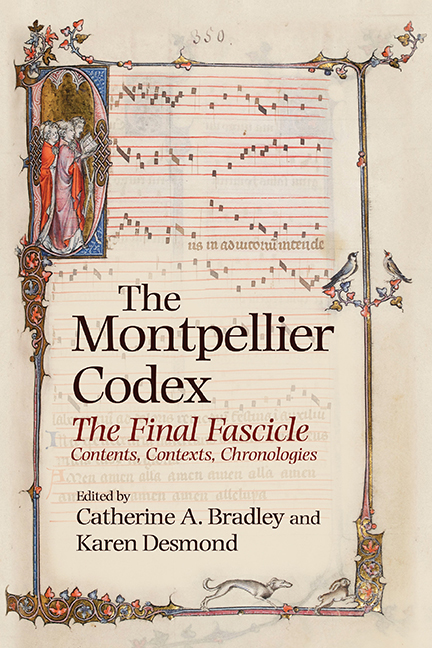 10 - How Rhythmically Innovative is Montpellier 8?

from II - INNOVATION AND TRADITION

As distinctive as the eighth fascicle of Mo seems, with its superb illumination and Franconian notation, it is important to be aware that its musical repertory is stylistically consistent with that of the seventh fascicle. Two new styles of motets appear in both fascicles 7 and 8: the motets with Petronian semibreves and those with sine littera passages. Certain features of modal rhythm that occur in fascicle 8 also appear in motets of the seventh fascicles, and some of these features are even found in the so-called old corpus of the first, third, and fifth fascicles. It has been argued that the rhythms of late thirteenth-century motets as found in the seventh and eighth fascicles were breaking away from the mid-thirteenth-century modal system. In pointing out symptoms of modal decline, Friedrich Ludwig characterized melodies in the new style as ‘emancipating themselves from modal rhythm’, and he evoked ‘the breakdown of the old modal system’ in referring to the transition from modal to mensural notation. Heinrich Besseler identified modal decay with the theory of Franco of Cologne, the rhythmic stratification of polyphony, the increasing importance of the semibreve with the consequent slowing of note values, the use of more extensive hocketing, and the anticipation of the Ars nova imperfect mode in certain pieces prior to the fourteenth century. This scenario is still accepted today. Whether or not the rhythmic modes were in a state of decline is a matter of debate. Identifying some of the ways in which the rhythms of Mo 8 compare with rhythmic practice in the other fascicles and how these features are explained in theoretical treatises of the late thirteenth and, possibly, fourteenth centuries will help provide a basis for evaluating the position of Mo 8 in an era of stylistic change.

HOCKETING, the quick and unusual alternation of tones and rests, is a technique that is found as early as the late twelfth and early thirteenth centuries, in the polyphony attributed to Pérotin. Rapid hocketing was rare at that time, but it can be regarded as one of various types of interruptions of the normal rhythmic motion of Notre-Dame polyphony. Theorists classified this motion at its most conventional into six rhythmic modes, one aspect of which consisted of patterns of durations (illustrated in Table 10.1).