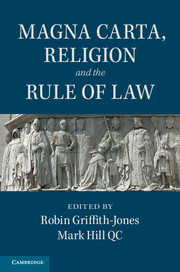 Magna Carta, Religion and the Rule of Law
Buy print or eBook[Opens in a new window]

Human rights were not invented in the 1940s and they certainly did not emanate from the Continent. When Blackstone referred to the ‘rights of all mankind’ 250 years ago, he said that they had been ‘more or less debased and destroyed’ in most other countries but remained, ‘in a peculiar and emphatical manner, the rights of the people of England’. Many of these English liberties were already of great antiquity when Blackstone wrote, though it would be historically naive to father them directly on the Great Charter of Liberties. Although Magna Carta was on the syllabus of the late-medieval law school in the Inns of Court, it was not seen as posterity has seen it. It was respected both as the Great Charter and the first statute in the statute books, but it was not a bill of rights or a scheme of government. It was a body of legislation giving rise to a lot of law, some of it very technical, some of it obsolete before the Inns of Court came into being. The benchers who lectured on Magna Carta in the fifteenth and sixteenth centuries glossed it phrase by phrase, sometimes word by word, but amid the welter of learning found little to say about constitutional principles or individual liberty. Indeed the ordinary gloss circulating in the early years of Henry VI's reign actually proclaimed that the king was above the law and not bound by Magna Carta. Far more time was devoted in the halls of the Inns to wardship and dower than to the fine-sounding words of chapter 29, which were so puzzling and controversial that it was unclear whether they had any legal effect at all. Trial by peers, they said, was confined to the peerage, and therefore the first part of the chapter could not, despite its wording, apply to all free men; selling right and justice was about charging fees for writs of right and justicies. The ‘law of the land’ was too vague to mean anything specific or fixed, since it could be changed by statute. In any case, the law of the land sometimes allowed imprisonment without due process, for instance when a constable arrested a suspect.