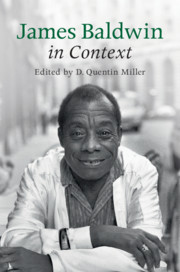 Chapter 5 - East Meets West: Baldwin in Istanbul in the 1960s

In dedicating this brief recounting of Baldwin’s stays in Turkey to Sedat Pakay, I pay homage to a dear friend and great artist whose unique vision of this key American, black queer writer on film and in photographs has inspired much work, including my book, James Baldwin’s Turkish Decade: Erotics of Exile (2009). Pakay’s cinematic gem, shot in 1970, beautifully captures private and public moments in the writer’s life in various Istanbul locations. In Pakay’s directorial eye the city becomes both a canvas, against which Baldwin stands out as a darker-skinned Westerner, and an integral part of who Baldwin is as an author living and working there – a smartly dressed intellectual strolling through his town. Istanbul’s squares, streets, even intimate interiors like the writer’s study, appear suffused with light and color, no matter that the film was shot in black and white. Pakay’s vision frames Baldwin as a complex, changeable, even conflicted, fiercely focused thinker and artist, “a kind of a poet,” as he names himself at one point in the film. It is this portrayal that best frames the writer’s brilliant final message on who we are as humans. Concluding one of his last published pieces, the essay “The Cross of Redemption” (1987), this message is as applicable to our own turbulent moment thirty years after Baldwin’s passing as it was when he penned it: “Complexity is our only safety and love is the only key to our maturity. And love is where you find it.”