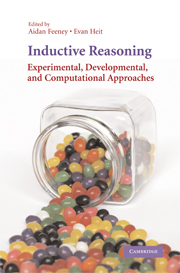 However much we may disparage deduction, it cannot be denied that the laws established by induction are not enough.

At the yearly proseminar for first-year graduate students at Northwestern, we presented some evidence that reasoning draws on separate cognitive systems for assessing deductive versus inductive arguments (Rips, 2001a, 2001b). In the experiment we described, separate groups of participants evaluated the same set of arguments for deductive validity or inductive strength. For example, one of the validity groups decided whether the conclusions of these arguments necessarily followed from the premises, while one of the strength groups decided how plausible the premises made the conclusions. The results of the study showed that the percentages of “yes” responses (“yes” the argument is deductively valid or “yes” the argument is inductively strong) were differently ordered for the validity and the strength judgments. In some cases, for example, the validity groups judged Argument A to be valid more often than Argument B, but the strength groups judged B inductively strong more often than A. Reversals of this sort suggest that people do not just see arguments as ranging along a single continuum of convincingness or probability but instead employ different methods when engaged in deductive versus inductive reasoning.

Earlier imaging evidence by Goel, Gold, Kapur, and Houle (1997) and by Osherson et al. (1998) had implicated separate brain regions when participants evaluated arguments for validity versus plausibility, and these earlier data had inspired our own experiment. All these results cast doubt on the view that there's a homogeneous “analytic” reasoning system responsible for correctly solving deductive and probabilistic problems.