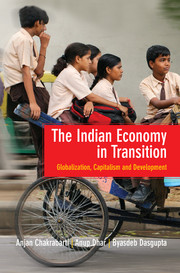 The Indian Economy in Transition
Globalization, Capitalism and Development
Buy print or eBook[Opens in a new window]

During the planning era, the ability to choose between import substitution and export promotion policy paradigm indicated the political freedom of national governments within the broader ambit of a cold war divided world order; postcolonial nation-states, thus, enjoyed a degree of freedom unprecedented in the colonial period. This altered following the advent of the new global order. Neoliberal globalization, in conjunction with global capitalism, has transformed the way in which the hitherto ‘national’ economies and policies, including that of India, came to be seen and represented. Erosion of the extant freedom of the state to enact nation specific policies followed the fallouts from debt crisis, balance of payments problem and consequences of the collapse of Soviet Union and its satellites. By early 1990s, the developing countries and erstwhile ‘socialist’ countries surrendered their policy independence to the dictates of the IMF and the World Bank (China being an outstanding exception), which, via the structural adjustment program (as symbolized by the Washington Consensus), propelled the shifts of the kind discussed in Chapter 4.

Before proceeding further, we place before the reader one clarification. India's economic reforms have often been notified as the complex of liberalization, globalization and privatization (Nayyar, 1993; Panchmukhi, 2000). This was certainly the case. Others described it as a movement from import substitution to export promotion strategy (Mukherjee, 2010). That also was certainly true. However, from today's vantage point, especially in the backdrop of economic reforms in tune with neo-liberalism, these distinctions do not matter. As explained in Chapter 4, economic reforms following neo-liberalism would telescope some of these elements (liberalization and privatization) and more, make the choice between export promotion and import substitution strategy irrelevant and ideally propose a symbiotic relation, as in current times, with globalization. Our reference to these terms should, therefore, be placed within the broader rubric of neo-liberalism that we have already elaborated.

Let us begin by tracing some of the points of reference and departure from the planning period in order to see why and how neo-liberal globalization came to be seen as the most rational panacea to India's problems. Later, we shall explore some of the substantive reforms, with far reaching societal consequences, introduced by this new neo-liberal order. Our analysis will show why India's ‘political economy of reform’ takes the colour and character of neo-liberalism.