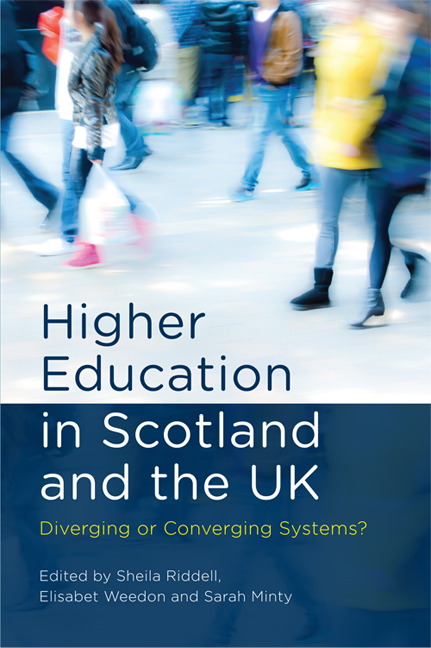 3 - Student Funding in the UK: Post-Devolution Scotland in a UK Context

This chapter examines the common claim that the development of a more socially just approach to student funding is a distinctive achievement of devolution in Scotland. It compares how the funding for students in full-time undergraduate higher education has developed in Scotland and the other devolved administrations since 1999 and what now distinguishes the arrangements for such students in Scotland from those in other parts of the UK. It shows that when systems are compared in terms of their distributional effects between students within each jurisdiction, it is the Scottish system alone which demonstrates a clearly regressive pattern, calling into question widely held beliefs about which students have benefited most from Scottish policy-making in this area since 1999.

THE CLAIM MADE FOR SCOTLAND

In August 2014 Michael Russell, then Cabinet Secretary for Education, said, ‘Scotland is the only country in the UK to ensure young people, our workforce of the future, can go to university based on ability, not the ability to pay’ (Russell, 2014). Over recent years, this has become the central claim distinguishing the Scottish approach to student support from that elsewhere in the UK. It draws on a belief often found in wider Scottish debate that Scotland is more egalitarian in its approach to higher education than England, in particular. Thus one commentator, a newspaper columnist who is a high-profile supporter of free tuition and a former Rector of Edinburgh University, stated that there is:

a feeling among MSPs that Scottish university principals are out of sympathy with the educational traditions of Scotland, summed up by the phrase the ‘democratic intellect’ … The choice is between an essentially privatised system of higher education, which is the English model, and the Scottish tradition of open access. (MacWhirter, 2011)

Behind such statements there lies a strong implication that the model of student funding adopted in Scotland is more socially just than those now found elsewhere in the UK.

The assertion that university tuition fees are inherently at odds with a specifically Scottish tradition has been a prominent feature of political debate over nearly two decades, with fee charging presented as alien to the history of the Scottish education system, including, importantly, its higher education system.