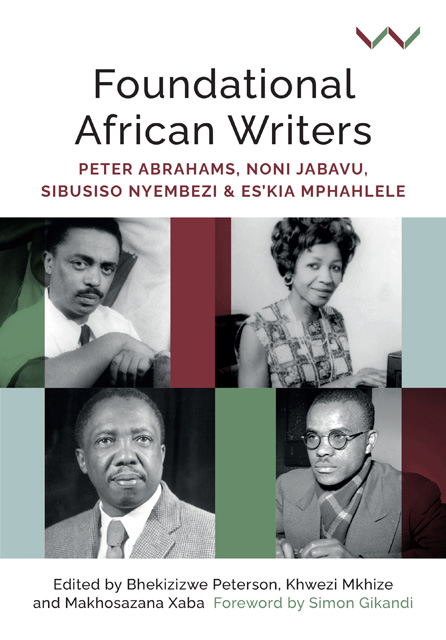 This book was imagined as a retrospective examination of the lives of four major African writers − Peter Abrahams, Noni Jabavu, Sibusiso Nyembezi and Es’kia Mphahlele − all born in 1919, now recognised as key figures in the founding of African literature and its criticism. Since the essays collected in this volume came out of a series of conferences celebrating what would have been their hundredth birthdays in 2019, the four writers are referred to as centenarians. But with its millennial connotations, the word centenarian also carries some significant symbolic weight in the history of modern Africa: the centenarians were born in the same year the new world order was born, or stillborn, at the signing of the Treaty of Versailles; they witnessed the tragedies triggered by this European arrangement, including the rise of white nationalism in South Africa; and, yes, they all lived long enough to witness the fall of apartheid and the final decolonisation of Africa.

But the book is much more than a celebration of a generation of pioneering writers and intellectuals and their struggle to define what it meant to be African in the long twentieth century; it is also a bold and expansive exploration of some of the questions that have troubled African literary history since the early 1960s. How and why did this literature emerge? What was the nature of the literary public that it both imagined and willed into being? What was the role of African languages in the making of this literary culture? Which writers were included in the emergent canon of letters and which voices were lost or repressed?

Bringing together a cross-section of literary and cultural scholars, many of them based in African institutions of knowledge production, this book is a powerful statement about what African literature looks like when read from below, outside the normative pressures of European and American institutions. In looking back at these centenarians and their important foundational work from the vantage point of the twenty-first century, we are able to see how the subordination of African literary history and criticism to the larger flow of theoretical work − most of it functioning under the rubric of poststructuralism − was both a blessing and a curse.