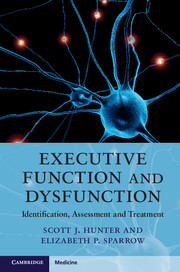 Executive Function and Dysfunction
Identification, Assessment and Treatment
Buy print or eBook[Opens in a new window]

from Section II - Executive Dysfunction in the Neurodevelopmental and Acquired Disorders

Many neurodevelopmental and acquired disorders show evidence of EdF. This may reflect the vulnerability of EF given the number of brain areas involved in the executive network, or the extended time frame for the development of EF (see Chapters 2 and 3). The chapters in this section describe the current literature on EF and EdF in a number of disorders that occur in pediatric populations, including clinical presentation and possible neurologic bases.

Although the precise deficits vary by study and by disorder, the disorders discussed in this section share the common element of some degree of EdF being present (although intact aspects of EF are seen as well). Research has identified known genetic links for some of these disorders, like Down Syndrome, and suspected genetic links for others. Neuroimaging has helped identify involvement of multiple aspects of the executive neural network, including white matter tracts, frontal lobes, cerebellum, and/or subcortical areas, for all of these disorders.

There are several recurring themes throughout these disorder-specific chapters. In many cases, comorbidity makes it difficult to determine which disorder is most directly associated with observed EdF, such as is seen with co-occurring ADHD, ODD, and Tourette Syndrome (TS). It can be difficult to determine whether executive deficits are present at greater levels than expected with the pattern of cognitive delays associated with a disorder, such as with some forms of Intellectual Disability (ID). Differences among clinical samples, including age, level of intellectual functioning, sex, SES, and comorbidities can lead to discrepancies among study findings. Age of participants, particularly relative to age of onset/insult, can have a large impact on findings given the developmental sensitivity of EF.