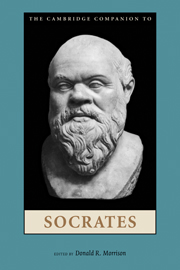 3 - Xenophon and the Enviable Life of Socrates

Socrates had the amazing good fortune of having Plato, one of the great literary figures of the West, to tell his story. Xenophon the Athenian (c. 425–354 bce) is not Plato’s equal, but his substantial writings about Socrates are second only to Plato’s for our knowledge of Socrates.

A most unusual man, Xenophon was as capable of leading hard men as he was of writing subtle books. As an adolescent, he knew Socrates, who was then nearing sixty, though it isn’t clear that he was among Socrates’ more devoted companions. While still in his mid-twenties, Xenophon was thrust into the command of a desperate troop of Greek mercenaries, stranded 1,000 miles from home before the gates of Babylon. Xenophon proved to be a charismatic and successful military leader. After many adventures, he led this famous band, known as “The Ten Thousand,” back home to Greece.

Exiled from Athens because of his Spartan connections, Xenophon in later life was a striking innovator in prose literary forms. His writings about Socrates, about one-sixth of his complete works, include two shorter pieces, the Symposium and the Apology of Socrates, that appear to recast Plato’s works by the same titles. The Oeconomicus (“The Artful Estate Holder”) is a reflection on wealth and virtue, set mostly as a conversation between Socrates and a wealthy gentleman. His longest Socratic work, known as the Memorabilia (“Memoirs of Socrates”), tells of a wide variety of Socrates’ conversations and actions, with a special emphasis on the good influence Socrates had on his friends in both word and deed.s