from Part I - Philosophy of Spirit and Hegel’s Philosophical System

from Part III - The Imagination in German Romanticism

from Part I - Life, Hermeneutics, and Science

from Part IV - Will, Value and Culture 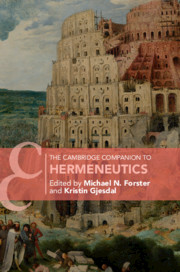 from IV - Mind, Language, and Culture