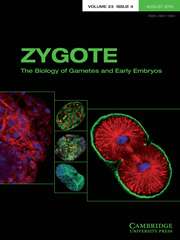 Protein kinase C (PKC) is a family of Ser/Thr protein kinases that can be activated by Ca2+, phospholipid and diacylglycerol. There is evidence that PKC plays key roles in the meiotic maturation and activation of mammalian oocytes. The present study aimed to monitor the effect of age, germinal vesicle (GV) transfer and modified nucleoplasmic ratio on the subcellular distribution profile of PKCα, an important isozyme of PKC, in mouse oocytes undergoing meiotic maturation and following egg activation. Germinal vesicle oocytes were collected from 6–8-week-old and 12-month-old mice. Germinal vesicle-reconstructed oocytes and GV oocytes with one-half or one-third of the original oocyte volume were created using micromanipulation and electrofusion. The subcellular localization of PKCα was detected by immunocytochemistry and laser confocal microscopy. Our study showed that PKCα had a similar location pattern in oocytes and early embryos from young and old mice. PKCα was localized evenly in ooplasm, with weak staining in GV at the GV stage, and present in the entire meiosis II (MII) spindle at the MII stage. In pronuclear and 2-cell embryos, PKCα was concentrated in the nucleus except for the nucleolus. After the GV oocytes were reconstructed, the resultant MII oocytes and embryos showed a similar distribution of PKCα between reconstructed and unreconstructed controls. After one-half or two-thirds of the cytoplasm was removed from the GV oocytes, PKCα still had a similar location pattern in MII oocytes and early embryos from the GV oocytes with modified nucleoplasmic ratio. Our study showed that age, GV transfer and modified nucleocytoplasmic ratio does not affect distribution of PKCα during mouse oocyte maturation, activation, and early embryonic mitosis.