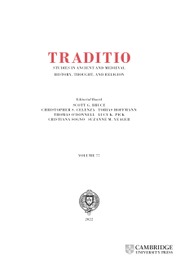 “Habent sua fata libelli.” This often-quoted line from the work of the North African grammarian Terentianus Maurus can safely be applied to two biographies of St. Augustine written by two men outstanding in the literary world of their age. They are Jordanus of Saxony (1300–1380 ca.) and John Capgrave (1393–1464).

6 Jordanus himself narrates a number of personal experiences with his teacher Prosper de Reggio (Liber Vitasfratrum II, 6) and his Prior Johannes de Lana (ibid., II, 8) at the Studium Generale in Bologna.

18 The editio princeps by Fivizzani, A. appeared at Rome in 1587–88. Later historians of the Order are constantly obliged to recur to the Liber Vitasfratrum for the early part of the Order's history; they even quote some chapters in their entirety Historians, not members of the Order, do the same thing, for instance, Hartmann Schedel in his Historia Universi ab initio mundi seu Chronica Nuerenbergensis (Nuremberg, 1493), and Antoninus archbishop of Florence (1446–59) in his Summa historialis s. chronicon bipartitum, tit. 24, cap. 14 (published also under the titles Chronicorum opus and Historiarum opus, for the first time in Venice, 1474–79). Walker, J. B., The Chronicles of Saint Antoninus—A Study in Historiography (Diss., The Cath. Univ of America, Washington, D. C., 1933), p. 97 makes the following remark concerning the above-quoted chapter 14: “Our investigation of the source of this brief history or apology has not as yet reached a point where a conclusion would be warranted.” The source is Jordanus's Liber Vitasfratrum (I, 14) from which it is taken almost literally.

20 The editio princeps appeared in Strassburg 1483.

21 This work of Jordanus was never printed and exists only in MSS.

27 The Commendatio is taken from the Milleloquium S. Augustini of Bartholomew of Urbino and enriched with new additions.

28 The Vita sanctae Monicae is a compilation of excerpts from the Confessions of St. Augustine. Its author is the Prior and later Abbot Walterus of Arrouaise, an abbey of Canons of St. Augustine, lying between Bapaume and Péronne: Acta SS, I Maii, pp. 478–85; cf. Bibl. Hagiograph. Lat., II, 875.

30 The Legenda de S. Augustino is but a shorter version of the Vita S. Augustini and the Translationes.

46 Cf. the list of Capgrave's lost Latin works in The Life of St. Katherine of Alexandria, Introd., p. XV