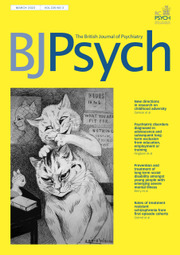 Louis Wain was famous in the late nineteenth and early twentieth centuries for his cartoons of anthropomorphised cats, which he used to show up human foibles and failings, at the same time communicating an irrepressible joie de vivre. In the words of H.G. Wells, he “invented a cat style, a cat society, a whole cat world”. Phrenology Cat pokes gentle fun at everyday gullibility and unscrupulousness. In later life, Wain's mental health declined, he was certified insane and admitted to Springfield Hospital in Tooting. As a result of a public outcry and fundraising appeal, he was transferred from there to Bethlem Royal Hospital in 1925, then on to Napsbury Hospital in 1930.

After decades in obscurity, Wain's profile is on the rise once more thanks to the cinema release earlier this year of The Electrical Life of Louis Wain, a biopic starring Benedict Cumberbatch and Claire Foy, as well as to Animal Therapy, an exhibition of Wain's artwork which continues at Bethlem Museum of the Mind (museumofthemind.org.uk) until 13 April.