From State-Building to European Integration: The Role of the Railway Network in the Territorial Integration of Europe, 1850–2020 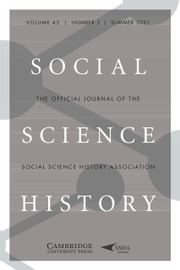