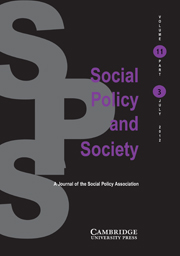 Themed Section on Waiting for a Better World: Critical and Interdisciplinary Perspectives on Intercountry Adoption