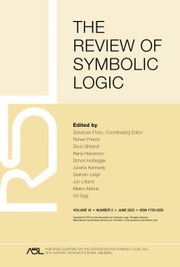 THE DEVELOPMENT OF GÖDEL’S ONTOLOGICAL PROOF

Part of: Mathematical Logic and Foundations History of mathematics and mathematicians General logic

Gödel’s ontological proof is by now well known based on the 1970 version, written in Gödel’s own hand, and Scott’s version of the proof. In this article new manuscript sources found in Gödel’s Nachlass are presented. Three versions of Gödel’s ontological proof have been transcribed, and completed from context as true to Gödel’s notes as possible. The discussion in this article is based on these new sources and reveals Gödel’s early intentions of a liberal comprehension principle for the higher order modal logic, an explicit use of second-order Barcan schemas, as well as seemingly defining a rigidity condition for the system. None of these aspects occurs explicitly in the later 1970 version, and therefore they have long been in focus of the debate on Gödel’s ontological proof.

Primary: 03B15: Higher-order logic and type theory
Secondary: 03B45: Modal logic (including the logic of norms) 01A60: 20th century 03-03: Historical (must also be assigned at least one classification number from Section 01)

THE DEVELOPMENT OF GÖDEL’S ONTOLOGICAL PROOF
×

THE DEVELOPMENT OF GÖDEL’S ONTOLOGICAL PROOF
×

THE DEVELOPMENT OF GÖDEL’S ONTOLOGICAL PROOF
×
×