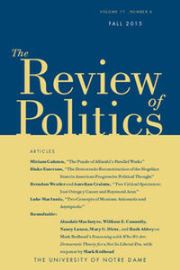 Roundtable: Mark Redhead's Reasoning with Who We Are: Democratic Theory for a Not So Liberal Era