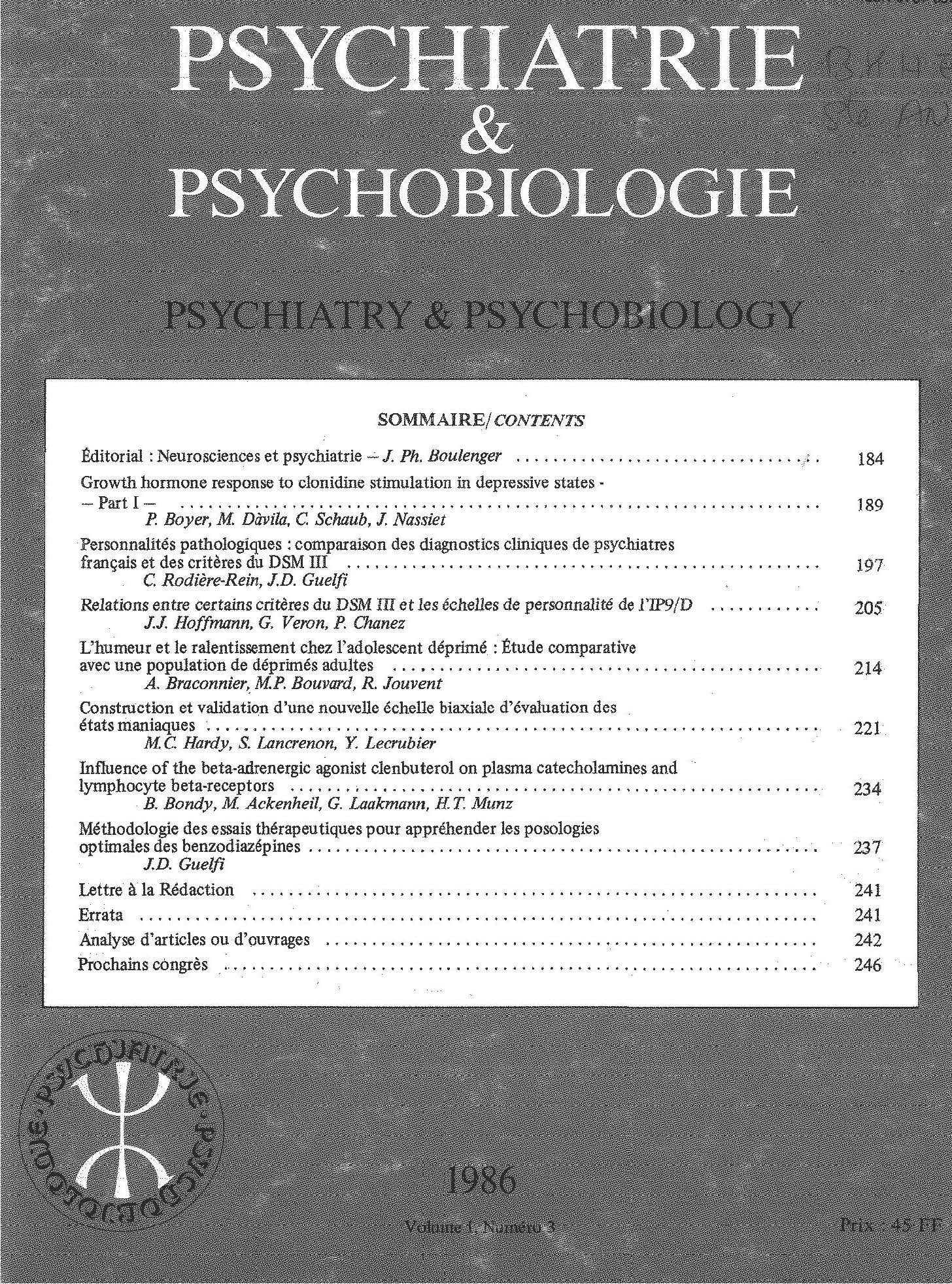 This article presents a criticism of the methodology traditionally used in subtyping schizophrenic patients, together with two empirical studies devised to test the validity of the distinction between positive versus negative schizophrenia.

The experimental approach consists of a presentation of two studies. The first, carried out in 99 schizophrenic patients, provides a subject-centered principal component analysis of the 42 items of the Brief Psychiatric Rating Scale, together with a factorial correspondence analysis which gives a dual plotting of subjects and variables. In the second study, a new hierarchical classification method (HICLAS), based on the search for asymmetric relationships, is processed in a subsample of 52 schizophrenic patients rated on a dichotomous version of the BPRS.

Results of the factorial analysis show that there are more than two types of schizophrenia, and that within these types, the distinction between negative and positive symptoms is clearcut and stable, regardless of the classification method adopted. This distinction holds well for three symptoms as regards the negative form: blunted affect, affective withdrawal and retardation; as regards the positive form, it is valid for grandiosity, elevated mood, manipulativeness, excitement, dramatization and emotional lability (table 3, fig 1).

In contrast to previous studies, neither hallucinatory behavior nor conceptual disorganization allows this distinction to be drawn between the positive and negative forms, probably because these symptoms are common to all types of schizophrenia. No relationship was found between the traditional clinical diagnosis and the statistical subtypes. The most negative patients, that is, those with the highest loadings on the factorial axis, differed from the most positive patients mainly in terms of variables related to sex, marital status and psychiatric antecedents (the former, predominantly male patient group presented a higher incidence of celibacy and more marked psychiatric antecedents).

The results of factorial analysis emphasize the higher frequency of mixed as compared with pure types, and show that less than 10 items are necessary to realize a satisfactory differentiation between positive and negative symptomatology.

All these conclusions are likewise valid for the hierarchical analysis. Furthermore, the present method allows better identification of the “pure” negative form patients, characterized by a very limited number of symptoms. Alongside these pure types are the mixed types in which positive and negative symptoms are hierarchically combined, that is, in which the negative or positive aspects are prominent. There are also patients belonging to residual forms with no identifiable hierarchy (table 4).

In conclusion, this study draws attention to the methodological problems neglected in previous attempts to determine a dissymmetry between the negative and the positive forms, in that only the negative form displays an important singularity. Moreover, the conclusions stress the fact that affective-related symptoms, particularly a reduction in affective life, seem to be more discriminative than the positive symptoms.

No Comments have been published for this article.