Celiac disease is an autoimmune disease. Several studies have been able to identify a region in chromosome 6 as the most relevant in the genetic predisposition, particularly the genes of HLA-DQ histocompatibility antigens, genes encoding certain molecules in the surface of lymphocytes specialised in the presentation of peptides. Gliadin found in gluten of cereals such as wheat, barley, rye, spelt, kamut wheat, triticale and possibly oat is recognised by celiacs as a harmful agent to the intestine activating T-cell lymphocytes leading to the release of pro-inflammatory cytokines with the ability of destroying normal intestine morphology and is characterised by a chronic inflammation at the proximal section of the small intestine. It is the chronic intestinal disease most common in Spain. It causes an atrophy of intestinal villi with subsequent malabsorption of nutrients (proteins, fat, carbohydrate, minerals and vitamins) and nutritional deficits. It affects 1 in 100 individuals, although it is estimated that this disorder is greatly underdiagnosed. The prevalence of celiac disease among the first-degree relatives is high, approximately 10%. The only treatment consists of a strict and life-long elimination of gluten from the daily diet. Gluten has been linked with other autoimmune diseases as well, including: Asthma, diabetes mellitus type I, autoimmune hepatitis, lupus, psoriasis, Sjögren's syndrome, vitiligo, Addison's disease, rheumatoid arthritis, hypothyroidism among others. After evaluating a sample of 432 patients with a diagnosis of celiac disease, it has been identified that a high percentage had other comorbid autoimmune disorders. Hypothyroidism (6.9%) was the most prevalent, followed up by asthma (5.8%) and hepatitis (5.1%). No cases of Addison's disease was found and only celiac patient had comorbid Lupus. Among celiac patients younger than 15 years of age the most common comorbidities were asthma (40.0%), diabetes type I (31.6%) and vitiligo (25.0%). All of celiac patients with psoriasis or lupus, were between 15 and 65 years of age, while Sjögren syndrome was the most prevalent disorder among patients with celiac disease older than 65 years of age (50%). Comorbidity in women was more prevalent than in males, particularly hypothyroidism (6.3% v. 0.7%, P=0.007), diabetes (2.6% v. 1.9%) and asthma (3.5% v. 2.3%) and to a much lesser extent psoriasis (1.6% v. 1.4%). 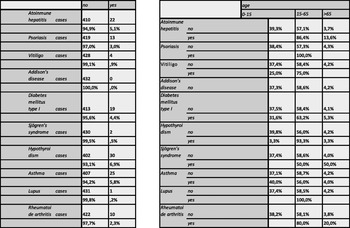