Perseus in Sicily: From Black Hole to Cluster Outskirts 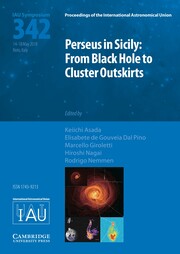